Swiss Skydiver was a superstar from the start 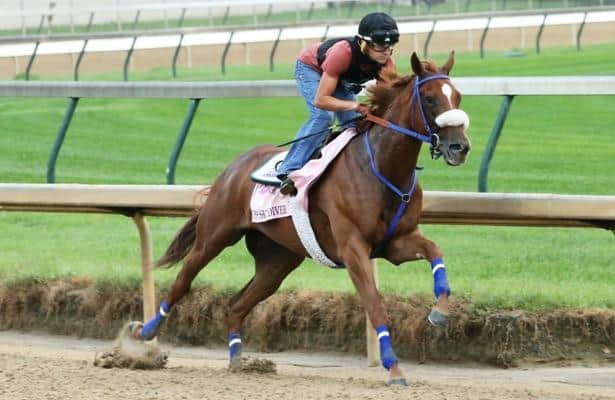 Long before she became the sixth filly to win the Preakness (G1) on Saturday, Peter Callahan’s Swiss Skydiver flaunted her talent at Keeneland, where she was purchased by trainer Kenny McPeek as agent at the 2018 September Yearling Sale. In defeating male rivals in the Preakness, Swiss Skydiver etched her name in the records alongside racing’s all-time great fillies and mares.

McPeek’s Keeneland-based assistant, Mike Kleier, vividly recalls Swiss Skydiver as a 2-year-old last year when she preparing for her career debut. She was a quick study who excelled against her classmates.

“She always showed that she was a heck of a horse in her workouts,” he said. “She was always outworking the competition by 5 lengths. One day Kenny said, ‘I hope that other horse is not that bad,’ and I said, ‘No, she is just that good.’ ”

Swiss Skydiver lived up to expectations in her first start despite being third choice at Churchill Downs in her career debut on Nov. 16. Near the back early in the 11-horse field, Swiss Skydiver gained command in the stretch and sailed home 5½ lengths in front. She has blossomed this year with five graded stakes victories, including the Preakness and Alabama (G1) at Saratoga. She was a game runner-up in both Keeneland’s Toyota Blue Grass (G2) against males and the Kentucky Oaks (G1) in her own division.

“I was confident she would run good in the Preakness,” Kleier said. “I just wanted her to have a clean trip. She was impeded (slightly) in the Oaks. We thought she got trapped on the rail and could not get through (on the turn for home).”

Kleier said Swiss Skydiver is always professional on the track and at the barn.

“She is very laid back, easy to gallop and takes everything in stride,” he said. “No muss, no fuss. She just wants to do her thing.”