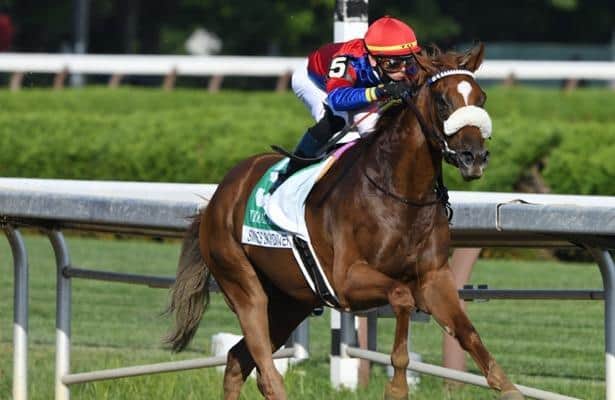 Last year’s Eclipse Champion 3-year-old Filly, Swiss Skydiver arrived at Santa Anita from her Gulfstream Park base on Tuesday and is poised to make her 4-year-old debut as she heads a field of eight older fillies and mares in Saturday’s Grade 1, $300,000 Beholder Mile at Santa Anita.

Trained by Kenny McPeek and owned by Peter J. Callahan, Swiss Skydiver, who defeated males two starts back in the Preakness Stakes, has been idle since running seventh at odds of 2-1 in the Breeders’ Cup Distaff at Keeneland Nov. 7.

Arguably the most incredible story in American racing last year, Swiss Skydiver, a Kentucky-bred daughter of Daredevil, out of the Johannesburg mare Expo Gold, ran at nine different tracks with six different jockeys in 10 starts from coast to coast, winning five, while running second twice and third once.

With four works on her comeback tab in February, Swiss Skydiver had her final work in preparation for the Beholder Mile this past Saturday at Gulfstream.  Although McPeek had hoped for five furlong move in about a minute, she encountered unexpected company and was clocked in 58.09 breezing, best of 39 at the distance.

With all five of her wins coming in graded stakes, Swiss Skydiver was ultra impressive in her lone Santa Anita appearance, going gate to wire while taking the Santa Anita Oaks (G2) by four lengths on June 6 at odds of 3-5.  Her first Grade 1 win came in Saratoga’s iconic Alabama Stakes on Aug. 15, as she pressed the early pace en route to a resounding 3 ½ length score at even money.

In winning the Preakness Oct. 3, she got the jump on Kentucky Derby winner Authentic and was tenacious late in posting a neck victory over the eventual Breeders’ Cup Classic winner and Horse of the Year.  Well supported in the Distaff, Swiss Skydiver stumbled at the break and never threatened thereafter, ending the year with 2020 earnings of $1,794,320.

A first-out maiden winner going seven furlongs at age two on Nov. 16, 2019 at Churchill Downs, Swiss Skydiver, who will be ridden for the third consecutive time by Robby Albarado, is 12-6-3-1 overall with total earnings of $1,845,480.

Although a winner of four consecutive races, from her maiden victory on July 3 at Los Alamitos, through her victory here in the Zenyatta Stakes (G2) Sept. 27, Harvest Moon, a 4-year-old daughter of Uncle Mo, was dismissed at 16-1 in the Breeders’ Cup Distaff Nov. 7, but ran a very respectable fourth, beaten 2 ½ lengths, after pressing the pace throughout.  Owned by Alice Bamford and Michael B. Tabor, Harvest Moon was bred in Kentucky by Alice Bamford and is out of the Shamardal mare Qaraaba.

Heavily favored at odds-on in all four of her starts, As Time Goes By comes off a rollicking nine length one mile allowance win here on Jan. 17, as she pressed the early pace and crushed four rivals under Joel Rosario at 3-5.  A four length maiden winner going six furlongs two starts back, As Time Goes By appears to be coming to her best in what will be her first stakes assignment.

A 4-year-old filly by 2015 Triple Crown Champion American Pharoah, As Time Goes By is out of the Dehere mare Take Charge Lady, who was a multiple graded stakes winner earner of more than $2.4 million that coincidentally, was trained by McPeek.  Owned by Michael B. Tabor and Mrs. John Magnier, As Time Goes By will be ridden for the first time by Mike Smith.