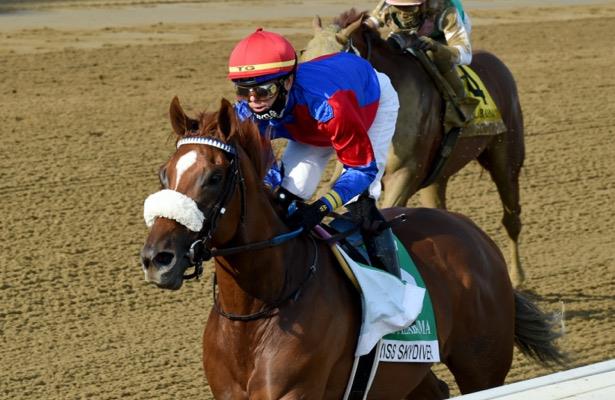 Trainer Kenny McPeek is playing the waiting game concerning a possible run for Swiss Skydiver in the Oct. 3 Preakness Stakes (G1) at Pimlico.

“It’s going to depend on who shows up,” McPeek said. “We are also nominating her to the Spinster and she’s been invited to the QEII. We’re shopping it, that’s all. We have three good choices. My strong preference would have been a 3-year-old filly Grade 1 [on dirt], but there isn’t one out there.”

Related: See how the Preakness field is stacking up

Peter Callahan’s Swiss Skydiver has already clashed with males, having finished second behind Art Collector in the July 11 Blue Grass (G2) at Keeneland. Art Collector went on to capture the Aug. 9 Ellis Park Derby but missed a start in the Sept. 5 Kentucky Derby (G1) due to a minor foot injury. Swiss Skydiver has run twice more, capturing the Aug. 21 Alabama (G1) at Saratoga and finishing second in the Sept. 4 Kentucky Oaks (G1) at Churchill Downs.

“She’s likes to run, work. She acts like she wants to do more. She never misses an oat. If she had backed out of the feed tub at any time, we would have spread her races, but she hasn’t done it,” McPeek said. “As long as she’s telling us she wants to do something, we’re going to consider it.”

McPeek conceded that a run in the Preakness for the daughter of Daredevil would be more likely if Tiz the Law, the Belmont Stakes (G1) winner who finished second behind Authentic in the Kentucky Derby, should skip this year’s third leg of the Triple Crown.

“We know the two toughies will be Art Collector and Authentic. They’re both nice horses. We’re just waiting to see who else is going,” McPeek said. “Right now, we’re undecided. We’re doing the research.”

Swiss Skydiver surged into prominence while winning the March 28 Gulfstream Park Oaks (G2), May 1 Fantasy (G3) at Oaklawn and the June 6 Santa Anita Oaks (G2) prior to her runner-up finish behind Art Collector in the Blue Grass.