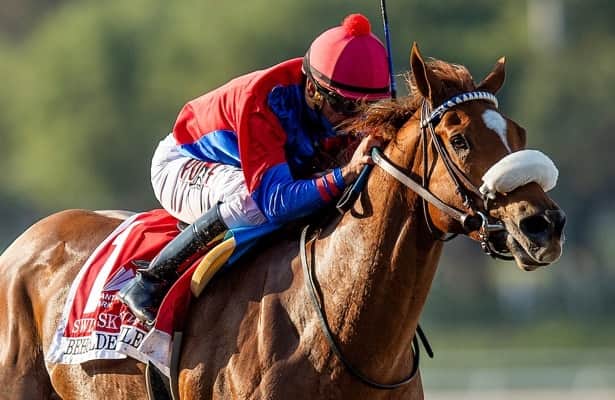 Swiss Skydiver has taken her show on the road here, there and yonder while notching six graded stakes triumphs over five different racetracks. On Saturday, the 2020 champion 3-year-old filly will vie to reign supreme over a new oval when taking on a compact but classy field in the 53rd running of the Grade 1, $500,000 Ogden Phipps at Belmont Park.

The prestigious 1 1/16-mile test for older fillies and mares is a Breeders’ Cup “Win And You’re In” qualifier, offering the winner an automatic entry into the Distaff on November 6 at Del Mar.

Owned by Peter Callahan, Swiss Skydiver boasts a lifetime record of 14: 7-3-2 and a bankroll of $2,125,480 in earnings, most notably becoming only the sixth filly in history to capture the Grade 1 Preakness Stakes at Pimlico Race Course. Her six graded stakes victories make up a cumulative 21 graded stakes triumphs in the Ogden Phipps field.

In the third start of her 3-year-old campaign, the daughter of Daredevil won her first graded stakes when taking the Grade 2 Gulfstream Park Oaks in gate-to-wire fashion and began adding miles to the tank with triumphs in the Grade 3 Fantasy at Oaklawn Park and the Grade 2 Santa Anita Oaks. After taking a crack against males with a game second in the Grade 2 Blue Grass at Keeneland, she recorded her first triple-digit Beyer Speed Figure with a 3 ½-length win in the Grade 1 Alabama at Saratoga, where she ran a 102.

Swiss Skydiver registered her biggest claim to fame thus far two starts later in the Preakness. At the top of the stretch, she engaged in a dramatic stretch duel with Kentucky Derby winner Authentic and managed to fend off the subsequent Horse of the Year by a neck while recording a career-best 105 Beyer.

Trainer Kenny McPeek gave Swiss Skydiver a freshening after a seventh-place effort in the Grade 1 Breeders’ Cup Distaff in November at Keeneland to close out her sophomore season. She returned to action with vigor when making her 4-year-old bow a winning one in the Grade 1 Beholder Mile at Santa Anita. She arrives at the Ogden Phipps off a distant third in the Grade 1 Apple Blossom on April 17 at Oaklawn Park.

Swiss Skydiver has put together a strong series of works heading into her upcoming engagement. She recently went a sharp half-mile over the Churchill Downs main track in 47.80 on Saturday morning.

“She’s been training super,” McPeek said. “We had a little hind leg infection that was bothering her. It didn’t appear to be a big deal going into Oaklawn, but it might have been why she ran a little flat that day. She’s trained like a beast going into this race. So, we’re lining up with her again. She’s obviously a great filly.

“She is pretty amazing, there’s no question,” McPeek added. “She doesn’t have many quirks and she loves her routine. She’s a very happy filly. She loves to eat, train and has been a pleasure for the people around her. I just hope it last a couple of more years. She’s very low maintenance.”

McPeek said Swiss Skydiver could target a start in the Grade 1, $300,000 Clement L. Hirsch on August 1 at Del Mar. She also could set sights on a return to the Spa for the Grade 1, $500,000 Personal Ensign on August 28. Like the Ogden Phipps, both races are also “Win And You’re In” events.

“The Grade 1 status and the timing for this race was ideal,” McPeek said. “We could have waited it out for the [Grade 2] Fleur de Lis [on June 26 at Churchill Downs], but we wanted to run here,” McPeek said. “I’d like to think we could get her to the Clement Hirsch in California or the Personal Ensign and then there’s the Spinster in the fall, too.”

“Peter is from New York, New York so obviously he was interested in this race himself,” McPeek said. “We’re also looking at the Saratoga schedule. It was a big deal for Peter when we won the Alabama. We’re going to meet Peter this week and hope to enjoy another big win.”

Jockey Jose Ortiz will attempt to be the sixth jockey to pilot Swiss Skydiver to a graded stakes triumph when she breaks from the inside post.

Three of Swiss Skydiver’s foes also are Grade 1-winners, including St. George Stable’s Letruska, who notched her first victory at such caliber last out in the Apple Blossom on April 16 at Oaklawn Park.

The conquest was a breakthrough one for the 5-year-old daughter of Super Saver, as she defeated two champions in Swiss Skydiver and Monomoy Girl, the reigning Champion Older Mare. After setting the pace, she was confronted by Monomoy Girl in upper stretch, but re-rallied along the rail to win by a neck.

“She’s doing very well since the Apple Blossom,” trainer Fausto Gutierrez said. “She’s trained very well at Keeneland. The first question I had was if she could fit with those kind of mares and she showed in that race that she could. She ran like a champion.”

Letruska brags the most amount of victories in the field with 13.

She scored her first six wins in as many starts in Mexico, where she won two Group 1 events. When shifting to the United States, she remained competitive at a high level with stakes triumphs in the Added Elegance at Gulfstream Park and the Grade 3 Shuvee at Saratoga.

Following a distant fourth in the Grade 2 Beldame Invitational, Letruska returned ten weeks later with a decisive win in the Grade 3 Rampart on December 12 at Gulfstream Park. Her career has reached new heights during her current campaign, which commenced with a sharp triumph in the Grade 3 Houston Ladies Classic on January 31.

Gutierrez said removing blinkers ahead of the Rampart benefitted Letruska.

“After we took the blinkers off, she had more chance to relax,” Gutierrez said. “She’s more competitive. She would go very fast. She’s a filly with some natural speed. She likes to run free.”

Letruska will be reunited with Irad Ortiz, Jr. from post 3.

Shedaresthedevil led a Daredevil-sired exacta in the Kentucky Oaks defeating Swiss Skydiver by 1 ½ lengths while completing the nine-furlong journey in 1:48.20 – the fastest time in the race’s history.

Owned by Flurry Racing and Qatar Bloodstock, Shedaresthedevil will seek to keep a clean 4-year-old season intact. Following a wire-to-wire win against Letruska in the Grade 3 Azeri at Oaklawn Park in her seasonal debut, she returned to Churchill Downs with vigor when defeating five graded stakes winners in the Grade 1 La Troienne on April 30.

“Off the bench, she’s 2-for-2 and was able to beat some really good horses,” Cox said. “She was able to keep her head in front of Letruska in her first start as a 4-year-old. She’s a big, beautiful filly and I think she’s moved forward from 3 to 4.”

Jockey Florent Geroux has been aboard for four of Shredaresthedevil’s five graded stakes victories and will be reunited with the talented bay filly from post 5.

The daughter of Munnings won in her 2021 debut when prevailing in the Grade 3 Doubledogdare on April 16 at Keeneland. During her sophomore campaign last March, Bonny South made her first start against graded stakes company a winning one in the Grade 2 Fair Grounds Oaks.

While Shedaresthedevil boasts a more accomplished resume, Cox said Bonny South is on the improve.

“She’s been training really well, and I thought her race off the layoff was huge,” Cox said. “I really feel this filly has moved forward from 3 to 4 physically, mentally and just how she’s training. We’re expecting a big year out of her. This is going to be her 4-year-old Grade 1 debut, so with a good trip, she can be a big factor. She breezed with Essential Quality and they both breezed fantastic.”

Jockey Joel Rosario wore Juddmonte’s iconic pink, teal and white silks when guiding Close Hatches to victory in the 2014 Ogden Phipps, and has the mount from post 7.

The gray Tapit mare makes her 5-year-old debut having last raced when second to Monomoy Girl in the Grade 1 Breeders’ Cup Distaff in November at Keeneland. Initially campaigned on turf, on which she won her first three starts, Valiance saw an alternation of her campaign after a victory in an off-the-turf Eatontown in August at Monmouth Park. She parlayed her newfound winning dirt form into Grade 1 company, capturing the Spinster on October 4 at Keeneland by three-quarters of a length.

“I think as she improved last year, she started training better and running better on the dirt,” said Pletcher who previously won with Ashado [2005], Life At Ten [2010] and Awesome Maria [2011]. “We were happy to run her when it came off. She came out of it and started training better and better. Obviously, the Spinster was a huge win for her and then she ran super in the Breeders Cup. It’s a tough race off the layoff, but she seems to be training well.”

Previously raced as the Hempstead through 2001, the Ogden Phipps honors the late philanthropist and horse owner, whose iconic and timeless black and cherry cap silks have been synonymous with some of the greatest thoroughbreds of the 20th century.

During his long tenure as an owner, Phipps campaigned multiple Hall of Famers such as Easy Goer, Buckpasser, Personal Ensign and Inside Information. One year after his passing in 2002, Phipps was posthumously awarded the Eclipse Award of Merit in 2003 and was named a Pillar of the Turf in 2019. The Phipps family remains active in racing under the moniker Phipps Stable, which is managed by Daisy Phipps Pulito with their horses being trained by Hall of Famer Shug McGaughey.

The Ogden Phipps is carded as Race 7 on Saturday’s 13-race program at Belmont Park. First post is 11:35 a.m.

*Rating is based on HRN fan votes, which rank the Top Active Horses in training.
Ogden Phipps Ogden Phipps (2021)