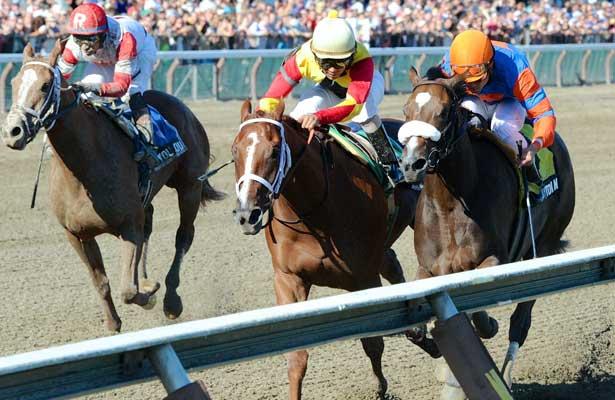 Saratoga Race Course long has been the summer showcase for thrilling debut runners, and on August 11 Sweet Whiskey turned in the kind of performance that gets race fans talking.

Breaking sharply from the gate, the 2-year-old daughter of freshman sire Old Fashioned sailed to the lead through an opening quarter-mile in 22.15 seconds and never looked back. Under a virtually motionless ride by Hall of Fame jockey John Velazquez, she crossed the finish line 5 ¼ lengths in front, racing 5 ½ furlongs in 1:02.51, just three-tenths of a second off the track record.

That dazzling debutante now will face a stern test of quality as she takes on eight foes Sunday in the 122nd running of the Grade 1, $300,000 Spinaway.

Sweet Whiskey sold for $300,000 this past March after sizzling workout at a Florida sale. On August 26, she turned in another fast work - four furlongs in 47.69 seconds, best of 48 that day at the distance - and trainer Todd Pletcher hopes she is up to the challenge off her sterling debut.

"It's a little bit of a short rest, and that's always a concern," Pletcher said, "and going to seven furlongs is always a concern, but she really impressed us with her breeze the other day and certainly showed us that she is behaving as if she's ready to come back with another big effort. We hope she runs to her training."

Sweet Whiskey, the 2-1 favorite on the morning line, drew the outside post position and retains the services of Velazquez. She has never faced pace pressure, and plenty of speed is signed on for the Spinaway, including another Pletcher runner, Stopchargingmaria, from the Repole Stable.

The daughter of Tale of the Cat, 3-1 on the morning line, went gate-to-wire in her debut as well, also under a hand ride from Velazquez. She will be ridden in the Spinaway by meet-leading rider Javier Castellano.

Undefeated in three starts, Designer Legs enters the Spinaway off a victory via disqualification August 11 in the Grade 2 Adirondack Stakes and is 12-1 on the morning line.

Trained by Dallas Stewart, Designer Legs broke behind dueling leaders and set up on the outside in fourth through an opening quarter-mile in 21.79 seconds. In the stretch, jockey Shaun Bridgmohan set down Designer Legs on the outside as favored Fiftyshadesofgold found herself trapped inside by Who's In Town, who crossed the finish line first, a neck in front.

Who's In Town was disqualified for interference, and Designer Legs was elevated to victory from second.

"She ran hard," Stewart said. "She got bumped, but she ran hard. She's doing very well, and she looks like she's growing, and we're happy with the way she's coming up to the race. We hope for a repeat of the performance from last time."

The dead-heat winners of the Grade 3 Schuylerville, Bahnah and Brazen Persuasion, also return in the Spinaway.

In that race, Brazen Persuasion, trained by Steve Asmussen, put away Yes Liz in a spirited speed duel and then braced for favored Bahnah after a half-mile in 44.68 seconds. As another runner, Elena Strikes, joined the fray as well, Brazen Persuasion held on as Bahnah could not get by.

Scott Blasi, assistant to Asmussen, pointed out that Brazen Persuasion is not one-dimensional, having rated off the pace in her maiden score June 29 at Churchill Downs.

"I think it's major," Blasi said of the experience. "You still have to be fast enough but having races under your belt going seven-eighths of a mile for the first time for all of them is a big deal. But you definitely have to be faster."

Brazen Persuasion is 5-1 on the morning line and Bahnah is 6-1.