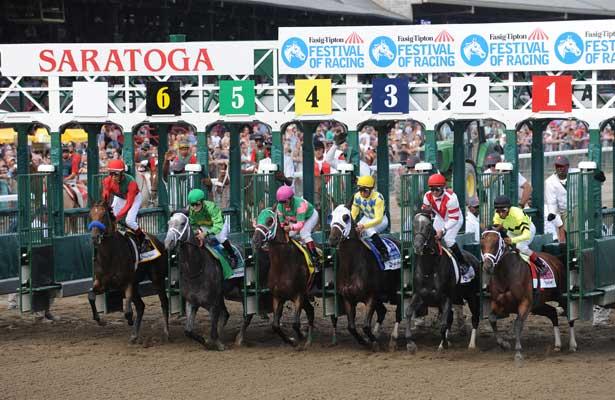 Sweet Reason may have won an off-the-turf maiden race to begin her career August 11, but the performance was impressive enough for her to open at odds of 8-5 on the tote board for the Grade 1, $300,000 Spinaway for 2-year-old fillies Sunday at Saratoga Race Course.

By the time the gate opened, Sweet Reason had risen to 5-2, and she ran to her backing, effortlessly sweeping to the front five wide on the turn and blowing away the field to win by 5 ¾ lengths.

Owned by Treadway Racing Stable and trained by Leah Gyarmati, who scored the first Grade 1 win of her career, the daughter of 2007 Kentucky Derby winner Street Sense completed the seven-furlong Spinaway in 1:23.42 over a track labeled sloppy.

As the second choice in the field of nine, Sweet Reason paid $7 for a $2 win wager.

Gyarmati, a former jockey, picked up the 199th win of her training career, which began in 1999. Surrounded in the winner's circle after the race, she expressed her joy with a huge smile.

"It was spectacular! Obviously, she ran impressively first time out when she won, but it was an off-the-turf race, and the competition wasn't anywhere near what she faced today," she said. "So, this is thrilling to do what she did against horses that have proven they are very, very nice horses."

The Spinaway featured the winner of the Grade 2 Adirondack, the dead-heat winners of the Grade 3 Schuylerville and a powerful pair of first-out winners from leading trainer Todd Pletcher, but Sweet Reason toyed with them.

At the start, favorite Sweet Whiskey broke sharply from her outside post, but she was soon joined in a four-way battle by Bahnah, Art of the Game and True Blue Nation. After a quarter-mile in 22.51 seconds and a half in 45.78, Bahnah clung to a half-length lead over Sweet Whiskey.

Sweet Reason's jockey, veteran Alex Solis, had perched his mount on the outside of the field in the clear, and when they reached the turn she glided to the leaders in a controlled and powerful surge. The race was all but over at the top of the stretch, and Solis tapped her one time on the right side and hand-rode to the wire.

Stopchargingmaria, stalking the pace the entire way, finished second, 4 ¾ lengths in front of Dancing House. They were followed by Sweet Whiskey, Designer Legs, Bahnah, True Blue Nation, Art of the Game and Brazen Persuasion, who refused to start and was walked off.

"She's so special," Solis said of Sweet Reason. "The other morning when I worked her, two horses broke off six lengths in front of her and by the three-sixteenths pole she had caught them and blew by them. That's what she does. She is just having fun. She runs like she has done it her whole life. She won easily."

In her debut, also on a sloppy track, Sweet Reason dropped 18 lengths off the pace in a 5 ½-furlong sprint and rolled by the entire field to win by 6 ¼ lengths.

"She trains very well on a dry track," Gyarmati said. "I'm sort of anxious to see how that translates into what she does in the afternoon on a dry track. But that's OK; this is good enough for me for now. I can live with this for a while."

Gyarmati said she would consider the Grade 1, $500,000 Frizette at one-mile on October 5 at Belmont Park, for Sweet Reason's next start.