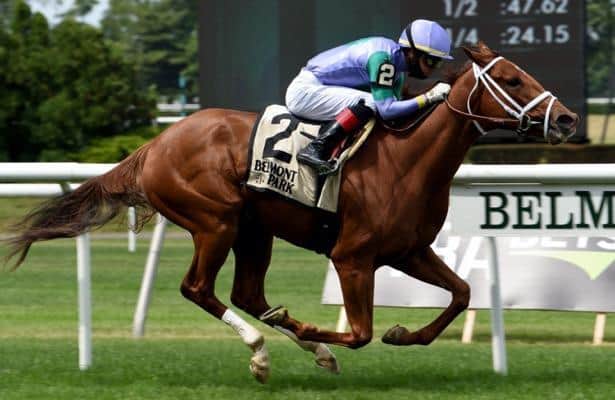 Sweet Melania, winless in four tries since June 2020, will step down to allowance company in Saratoga's seventh race on Wednesday. But that the competition will be stiff, as she will be one of three graded-stakes winners in the race.

Her last win came in the Wonder Again (G3) at Belmont. After that, she finished second in the Lake George (G3) in August, seventh in the Queen Elizabeth II Challenge Cup (G1) in October and fourth in the listed Sand Springs at Gulfstream in March.

Chad Brown brings Tamahere, who raced in France before winning the Sands Point Stakes (G2) in her North American debut last October. She is winless in three graded-stakes starts since.

Christophe Clement has entered Speaktomeofsummer, looking for her first win in six tries since she won the Lake Placid (G2) last July at Saratoga.

Also entered is Shug McGaughey's Hungry Kitten for her first start of the year. The 5-year-old daughter of Kitten's Joy won two allowance races at Belmont Park and Saratoga last year before finishing second in the black-type Zagora Stakes and 11th in the Long Island Stakes (G3) last out in November.

Too wide: Medina Spirit will not go to Pennsylvania Derby
Medina Spirit , the 2-1 morning-line favorite for...