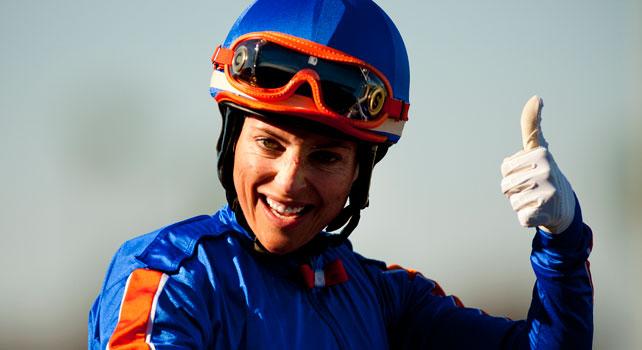 A year after losing by a nose to First Dude in the Grade I, $500,000 Hollywood Gold Cup, jockey Chantal Sutherland and Game On Dude made amends.

The anticipated victory by the 2-5 favorite in the 73rd renewal of Betfair Hollywood Park’s signature race was historic. Sutherland, who became the first female to ride in the race in 2011, became the first of her sex to win Saturday, prevailing by 1 ½ lengths over 5-2 second choice Richard’s Kid.

The finish gave Hall of Fame trainer Bob Baffert his second exacta sweep in as many years. The win was his fourth in the Gold Cup. Real Quiet (1999) and Congaree (2003) preceded First Dude and Game On Dude.

Becoming the first horse to win the Gold Cup a year after finishing second since Ancient Title followed his runner-up effort to Tree Of Knowledge in 1974 with a 1975 victory under Laffit Pincay, Jr., Game On Dude completed the 1 ¼ miles over Cushion Track in 2:04.19.

Since the Gold Cup was a Breeders’ Cup Challenge “Win and You’re In’’ event, Game On Dude earned a berth in the Breeders’ Cup Classic, a race in which he was second to Drosselmeyer last Nov. 5 at Churchill Downs. This year’s Classic will be run Nov. 2 at Santa Anita.

Additionally, all entry fees will be waived for Game On Dude and his owners will receive a $10,000 travel allowance.

Tracking surprising pacesetter Spud Spivens through a quicker than expected 47.71 opening half mile, Game On Dude started to inch away around the far turn, kicked three lengths clear with a quarter of a mile to run and held sway under some left handed encouragement from Sutherland.

Spud Spivens faltered to fourth, 4 ¼ lengths behind Kettle Corn, and was followed by Vanity upsetter Love Theway You are, who was trying to become the first female winner of the Gold Cup since Princessnesian in 1968, Anthony’s Cross and Thirtyfirststreet.

“They had to run one-two,’’ said Baffert. “They’re two really good horses. That longshot (Spud Spivens) made them go pretty brisk. Game On Dude was getting a little tired, but he needs the competition.

“It looked like Richard’s Kid was going to come up to him, but he dug in there at the end. I’m glad they both ran their races and I’m happy for Chantal because I sort of got goose bumps when (track announcer Vic Stauffer) said she was trying to become the first woman to win this. I hoped it wasn’t the kiss of death.’’

Baffert indicated how Game On Dude trains at Del Mar will determine whether or not the dark bay runs in the Grade I, $1 million-guaranteed TVG Pacific Classic – a race in which he was fourth in 2011 – Aug. 26 at Del Mar. The 1 ¼ mile race is the destination for Richard’s Kid, who already owns two Pacific Classic victories (2009 and 2010).

“I could actually hear Rafael (Bejarano, who rode Richard’s Kid), yell, ‘I’m coming Chantal,’ at the quarter pole,’’ said Sutherland. “We’re friends and it was just like ‘I’m coming to get you,’ like a game of tag.

“(Game On Dude) wanted to go after (Spud Spivens) early and kept fighting and fighting, but then he kind of chilled out a little bit. When he started getting a little pushy about it, I had let him to do his thing. Down the lane, I didn’t want to hit him or push on him, but I was getting a little nervous.

“It’s exciting (to be the first female to win the Gold Cup). I feel really honored. It’s pretty cool. I hope I’m one of many more to come.’’