Supporters baffled as Tagg is overlooked for Hall of Fame 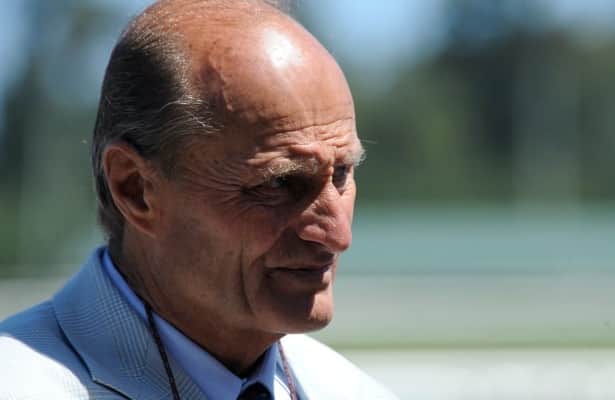 When Tiz the Law delivered an authoritative Belmont Stakes victory last year and followed that with an even more impressive Travers score, it appeared the timing was perfect for trainer Barclay Tagg to be nominated to the National Museum of Racing’s Hall of Fame.

Although the pandemic forced the traditional Belmont marathon to be slashed to 1 1/8 miles and contested as the opening leg of the Triple Crown, it nonetheless followed Funny Cide’s 2003 Kentucky Derby and Preakness successes to give Tagg a personal sweep of the classics that drive the sport.

When Tiz the Law stormed home by 3 3/4 lengths in the Belmont, it vaulted Tagg into the company of Hall of Famers Bob Baffert, D. Wayne Lukas and Nick Zito as trainers who completed personal Triple Crowns. To those close to Tagg, he all but ensured a Hall of Fame nomination when he added to his resume the Travers, the famed “Mid-Summer Derby,” at iconic Saratoga Race Course.

Trainers Christophe Clement, Doug O’Neill and Todd Pletcher joined jockey Corey Nakatani and six Thoroughbreds in receiving the required two-thirds approval from the 15-member Hall of Fame nominating committee. That left Tagg supporters to wonder whether he will ever be placed in front of the national voting body, where only a majority is needed.

“I don’t know what to say other than I certainly think he deserves it,” said Zito, a 2005 inductee. “Why would somebody feel like he doesn’t deserve it? I don’t understand.”

Robin Smullen, Tagg’s life partner and assistant, also is baffled. “You wonder what the criteria really is, especially when you go through the accomplishments, having won a personal Triple Crown,” said Smullen.

No entity has benefited more from Tagg’s keen eye for a racing prospect and his training acumen than Sackatoga Stable, a modest partnership based in upstate New York. Tagg swung a private purchase to land Funny Cide for $75,000 as a 2-year-old. He went to $110,000 — rarified air for him — to purchase Tiz the Law as a yearling at Fasig-Tipton’s Saratoga Sale in 2018. The New York-breds captured seven Grade 1 races between them for Sackatoga.

“He’s done a lot without the kind of money behind him and the kind of horses that a lot of trainers like, obviously, a Todd Pletcher has,” said Jack Knowlton, Sackatoga’s racing manager. “Todd certainly deserves to be in. But even Todd hasn’t won a Preakness.”

Even if Tagg, 83, is nominated next year, he would not be the no-brainer that Pletcher is. He has never won a Breeders’ Cup race. He has overseen only one champion, when Funny Cide was celebrated as the top 3-year-old in 2003.

His career statistics do not leap off the page. According to Equibase, he had won at a 16 percent clip with 1,590 victories from 9,909 starts as of March 8. His horses had hit the board 45 percent of the time while earning almost $64 million.

“A lot goes by Grade 1 horses and classic horses and Barclay just hasn’t had enough,” Haskin said. “I think if Barclay had one or two more classic Grade 1 horses, the discussion as far as being on the ballot would be greater.”

Tagg’s roster of Grade 1 winners includes Bit of Whimsy, Funny Cide, Island Fashion, Jersey Town, Miss Josh, Nobiz Like Shobiz, Royal Mountain Inn, Showing Up, Tale of Ekati and Tiz the Law. He owns victories in many of New York’s most prestigious races, including the Alabama, Jockey Club Gold Cup and Suburban. He is a two-time winner of the Wood Memorial and the Cigar Mile.

It has perhaps hurt Tagg’s cause through the decades that he never courted the media or, for that matter, well-heeled owners who might have allowed him to elevate his stock. He made clear his devotion to racing during a national conference call in late August that preceded Tiz the Law’s second-place finish to eventual Horse of the Year Authentic in the rescheduled Kentucky Derby.

When asked whether he believed he was worthy of Hall of Fame consideration, he replied: “Well, of course I feel that way because I’ve worked hard, you know. I’ve given up everything else in life practically to do this day in and day out for the last 50 years. So, of course, you’d like that.

“But, you know, mostly it’s owners who get you in the Hall of Fame. And, if you can come up with a good owner, they’ll spend money and have faith in you. I think that’s your best shot, and I’m not taking anything away from the other trainers. There’s a lot of trainers I admire quite a bit. But if you’ve got the horses, that’s a big help.”

Smullen hurt for Tagg when he was not among this year’s nominees. “You are supposed to think the Triple Crown is the World Series,” she said. “If you win your personal World Series, wouldn’t you have thought that would have been enough? I don’t know.”

Tagg declined to be interviewed.

Smullen made clear how much he longs for racing’s ultimate honor, saying: “It has been his goal for a very long time. In his mind, he feels he is not accomplished if he hasn’t gotten into the Hall of Fame.”