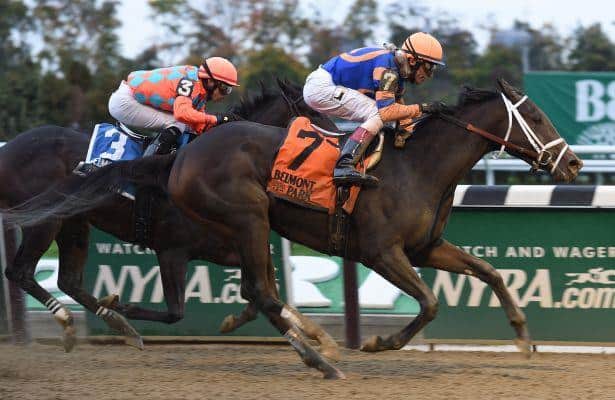 Repole Stable's Super Surprise will look to extend her winning streak to four as she headlines a field of 11 New York-bred fillies and mares 3-years-old and up in Sunday's $125,000 Staten Island at seven furlongs at Aqueduct Racetrack.

Super Surprise has posted back-to-back personal-best 86 Beyer Speed Figures in her last two starts, including a four-length score last out in the Fleet Indian at 1 1/8 miles on August 26 at Saratoga Race Course.

Trained by Todd Pletcher, Super Surprise is 3-1-1 in six career starts and is turning back in distance. The 3-year-old won two starts during the Saratoga meet, including a 2 ¼-length win against allowance company on July 24, after capturing the Maid of the Mist on October 24 at Belmont Park.

"She's pretty versatile and has won at multiple distances, so I think seven-eighths will suit her well," Pletcher said. "She should be fresh and hopefully she runs a race like she usually does. She has enough racing experience and has seen every scenario, so I think she'll be okay."

Super Surprise will leave from post 2 with Hall of Fame jockey John Velazquez aboard.

"She should be fine," Pletcher said about her post position. "She showed us in Saratoga she can take dirt and run inside."

Magdalena Racing's Wonderment is coming off consecutive runner-up finishes, including last out in the Iroquois on October 22 at Belmont. Trained by Kenneth McPeek, Wonderment will run at the Staten Island distance for the first time since coming in second in the Dogwood on September 24 at Churchill Downs.

The field's lone graded stakes winner, Wonderment captured the Grade 3 Bourbonette Oaks on April 2 at Turfway Park. The 3-year-old daughter of Cosmonaut will exit the rail with Joel Rosario aboard.

Frosty Margarita is 4-4-2 in 14 career starts Irad Ortiz, Jr., who has piloted her in all of her career victories, will be in the irons out of post 9.

Storied Lady is a multiple stakes-winner and should be fresh after last starting in the Critical Eye on May 30 at Belmont. The 5-year-old will be racing at seven furlongs for the first time in seven starts. Trained by John Hertler, Storied Lady is looking for her first win since the Biogio's Rose on February 7 at Aqueduct

Hey Kiddo has finished in the money in six of her last eight starts. The Ramon Preciado-trainee has been consistent in compiling a 6-8-1 record in 22 career starts, earning $410,168 for owners J A G Racing and Jettany Thoroughbred.

A 5-year-old dark bay mare, Hey Kiddo won against allowance company last out on October 24 at Parx and has a stakes win on her resume, finding the winner's circle in the Roamin Rachel in October 2015. She drew post 5 with Jose Ortiz on the call.

Highway Star has started strong, going 3-0-1 through five career starts, including a third-place showing in her last stakes race in the Fleet Indian on August 26 at the Spa. The 3-year-old chestnut filly, trained by Rodrigo Ubillo, will leave post 3 and have the services of jockey Angel Arroyo.

Familyofroses will make her ninth start of the season, leaving from the outside. Trained by Neal Terraciano, the 6-year-old will return to stakes company for the first time since a sixth place showing in the Union Avenue on August 18 at Saratoga. She has run well at Aqueduct, with three runner-up finished in four career starts. Jackie Davis is set to ride.

Uncle Southern will make her first stakes start of the year after going 1-2-1 in her last four starts. Trained by Linda Rice, the 6-year-old bay mare will look for her first stakes win since the 2014 Union Avenue out of post 6 in tandem with Javier Castellano.

Rounding out the field are Perfect Freud, from post 7, for trainer Gary Sciacca; Rosie P, who is making her stakes debut for trainer Gregory Sacco out of post 8; and Lady Kreesa, who returns to stakes company for the first time in six starts, for trainer David Donk out of post 10.

Workouts: Epicenter is 1 of 51 graded-stakes winners on the tab
Widely regarded as the leader in the 3-year-old ma...

Taiba makes bold move in stretch to win Penn Derby
A late entry came into the mix for the best 3-year...
x