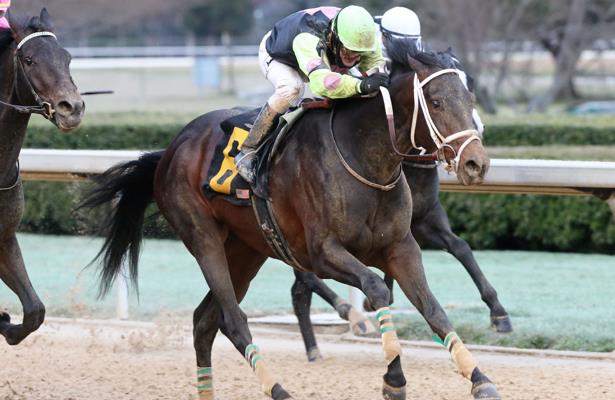 Trainer Larry Jones said back in November he’d run Super Steed into shape, avoiding flashy works in exchange for more races on the colt’s road to the 2019 Kentucky Derby.

To the tune of 62-1, the plan started paying off in Monday’s Grade 3, $500,000 Southwest Stakes at Oaklawn Park, where a five-wide move through the turn propelled the son of Super Saver to the lead at the top of the stretch.

The Southwest awarded to the Top 4 on a 10-4-2-1 basis, with Six Shooter filling out the board in the contentious field of 11.

Super Steed, who broke his maiden in an eye-catching allowance race on Nov. 24 at Churchill Downs, returned $126.60 on a $2 bet. In December, however, he went on to miss as the favorite to Southwest Stakes rival Gray Attempt in Fair Grounds' Sugar Bowl, then ran seventh in Oaklawn's Smarty Jones.

"The horse was a little puny when we went to Louisiana," Jones said after the 3/4-length Southwest score. "It wasn't that he was sick. He just wasn't feeling well. But we decided to go ahead and run him, and it did not hurt him. We knew he'd had so little experience. We needed to get another race under his belt.

"Then we got in here on Smarty Jones day, and it was one of those days the track played as a merry-go-round race. We didn't ask him real hard to leave. He was last and next to last early in the race. That's where he finished. So we were hoping the track bias that day was why we looked as bad as we did.

"We liked the way he trained coming in here. The horse has been going really well, and I'm fortunate I get to gallop him in the morning. I thought, 'Man, he's never done better.' So here we are."

Michael Pressley and Steed Jackson campaign the homebred, who improved his record to 2-1-0 in five starts and will likely run back in Oaklawn's March 16 Rebel Stakes (G2).

Super Steed rallied off a contentious pace set by Gray Attempt, from the inside post, and Jersey Agenda, sent from the gate as one of a quintet of Steve Asmussen trainees in the field of 11. Those two bumped heading into the first turn but continued on through opening fractions of 23.43 and 47.63.

“Very unsportsmanlike what they did," said Jinks Fires, who trains Gray Attempt. "I don't mind them outrunning us, making us keep running. But don't come in and wipe me out.”

Into the far turn, shippers Cutting Humor (Todd Pletcher) and Olympic Runner (Mark Casse) joined Gray Attempt and Jersey Agenda on the lead, making it four-wide. But Super Steed circled them all with a powerful middle move to win it as Sueno chased.

"Great race," said Keith Desormeaux, the West Coast invader Sueno's trainer. "It would have nice to get through earlier. This horse is as legit as they come. We are very thankful to have him in our stable.”