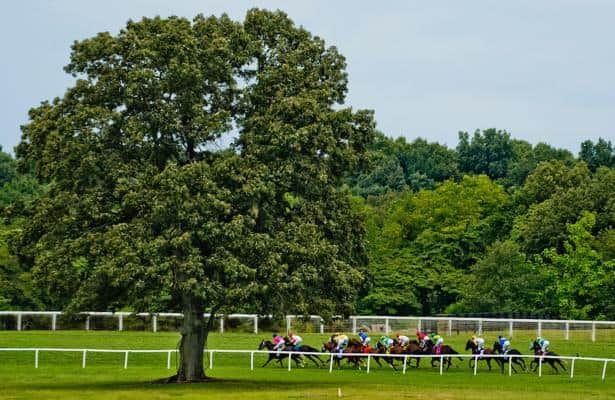 While the Saratoga meet has come to an end, there is still plenty of high-class action on this weekend from around North America, most notably at Kentucky Downs and Del Mar.

This week's Super Screener provides in-depth analysis and wagering strategies for seven graded stakes from those two tracks, plus suggested plays for the late Pick 4 at Kentucky Downs.

Among the offerings from Super Screener is the $1 million Kentucky Downs Turf Sprint (G2). Carded as the ninth race on 12-race card, the six-furlong Turf Sprint attracted an overflow field of 15 horses with three on the also-eligible list. Arrest Me Red, who drew post 12 for trainer Wesley Ward, is the solid 9-5 favorite on the morning line with Irad Ortiz Jr. in the irons.

Super Screener is going price hunting in the Turf Sprint. At 15-1 on the morning line, Front Run the Fed is rated as a "top win contender," the "most reliable board hitter," and a "top long shot."

From the low-profile Caio Caramori barn, Front Run the Fed won the 5 1/2-furlong Van Clief Stakes at Colonial Downs in July in his first start in more than nine months. He then returned in Grade 1 company and was beaten just three lengths when stretched to a mile in last month's Fourstardave at Saratoga.

In last year's Kentucky Downs Turf Sprint, Front Run the Fed was beaten 3 1/4 lengths when seventh. That came in his second start for Caramori after previously being with top trainer Chad Brown.

From Super Screener: "We benefit from a ton of value on this very productive and lightly raced 6-year-old who just submitted a pace top going a mile against Grade 1 company...It was his second race off the 9-month layoff and form cycle analysis is flashing an all-green signal with an anticipated move forward here."

The analysis and wagering strategies for the Kentucky Downs Turf Spring is just a piece of what you'll find in this week's Super Screener. To purchase a copy and take your handicapping to the next level, click here.