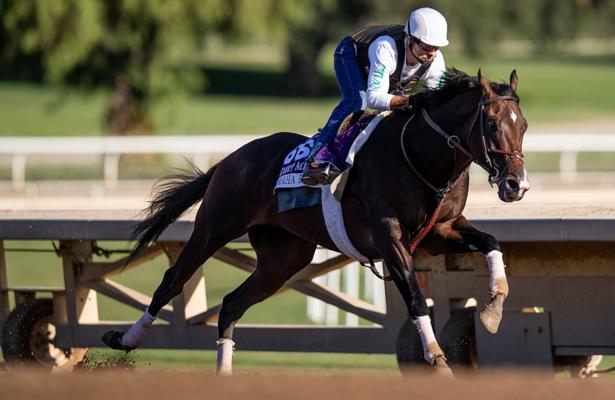 In deciding to postpone the traditional day-after-Christmas opening day card due to rain in the forecast at Santa Anita Park, track officials also ensured a loaded Saturday slate of stakes races.

Five stakes originally scheduled for Dec. 26 will shift to Dec. 28, which already had a Grade 1 event of its own on the calendar. The first winter season not to kick off on its traditional date since 1976 should be a memorable -- and dry -- program.

Among the horses set to appear in those races: Omaha Beach, Roadster, Instagrand, Bellafina and Gift Box, among other fan favorites.

“Opening Day is traditionally one of our biggest days of the year, but our commitment to safety is first and foremost,” Aidan Butler, acting executive director of California for The Stronach Group, said in a statement released Saturday evening.
“It was very important to make this call as early as possible for our horsemen, fans and employees.  There are many moving parts, especially in the training of these wonderful horses, and this decision is being made at this time out of respect to give all involved plenty of advance notice.”

Given that super Saturday of sorts lined up, it's likely worth the extra two days of waiting.

As of Sunday, the National Weather Service calls for a 50% chance of rain on Christmas Day in Arcadia, Calif., with precipitation "likely" overnight. Concerns with Santa Anita officials were both the prospects of scratches in main track events and having to take races off the turf. This is only the beginning, after all, of a season that runs through June.

Entries will be taken Monday for the rescheduled opening day card. Santa Anita was also slated to race Friday. The $75,000 Eddie Logan Stakes will move to Sunday, Dec. 29, and run alongside of the $75,000 Blue Norther.