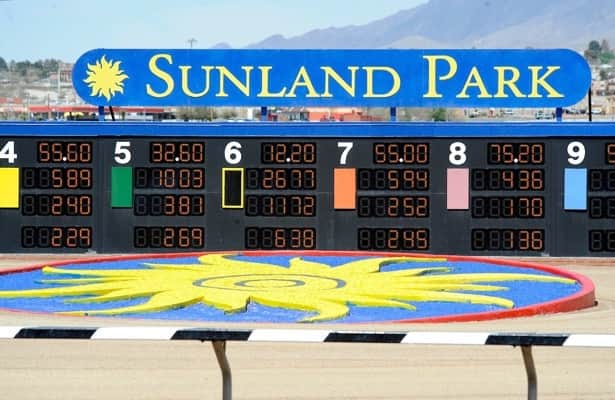 The 2020-21 racing meet at Sunland Park Racetrack & Casino was formally canceled this week because of COVID, once again raising concerns among horsemen about the future of racing in New Mexico.

Home to the world's richest quarter-horse races and the Southwest’s most important prep race on the road to the Kentucky Derby, the state finds itself in peril of quickly becoming irrelevant in the racing industry.

A motion to cancel the Sunland Park racing season passed by a 4-0 vote at Thursday’s monthly meeting of the New Mexico Racing Commission.

NMRC executive director Ismael Trejo said the decision to cancel the season was based largely on a lack of casino revenue.

“We rely on the casinos for a great deal of our purse money,” Trejo said. “But we have to respect the orders from the state’s Department of Health.”

The Sunland meet was scheduled to start Dec. 26 and finish March 30, but no racing has been held. It was March 15, 2020, when the racetrack and casino were shut down. The rest of last year’s meet was promptly canceled, including the Grade 3 Sunland Derby, a points qualifier for the Kentucky Derby.

This week’s decision by the NMRC means that, for the second straight year and for the third time in the last six seasons, the Sunland Derby will not be held. Last year’s event was canceled less than a week before it was to be run. In 2016, the race was canceled because of an outbreak of equine herpesvirus and was replaced by the Sunland Park Festival of Racing Stakes.

Ry Eikleberry, a five-time riding champion at Sunland who is tied for third this season at Sam Houston Race Park, said he was disappointed by the decision to cancel the meet. But he was not surprised.

“We sort of knew it was coming, but it’s difficult to see it,” Eikleberry said. “Me and my family made a home there, and with this and so much uncertainty it’s a tough place to make it. I understand how the casinos drive purses. But they managed to operate racing in other states. For a lot of us trying to find new homes, it’s really turned our lives upside down."

Casinos not only at Sunland Park but at racetracks in Albuquerque, Hobbs, Ruidoso and Farmington remain closed. Ruidoso Downs finished its summer racing meet last September with few to no fans in attendance, while Albuquerque and Zia Park finished their meets in the fall with reduced dates and purses.

Restrictions on capacities and operations vary in New Mexico. Casino facilities on tribal land are autonomous, and several have been open for stretches of time, even as casinos at racetracks have been shut down since last spring. Some counties have allowed businesses to reopen and host large gatherings. Others have not.

Doña Ana County, where Sunland Park is located, has allowed limited reopenings. So has Bernalillo County, which includes Albuquerque. Lincoln, San Juan and Lea counties, home to the state’s other racetracks, remain virtually locked down.

“That's the real issue we’re facing,” Trejo said, “the complications that come up when one county can reopen but another cannot. It creates problems for everyone involved in the racing industry.”

According to the NMRC website, Ruidoso, SunRay Park, The Downs at Albuquerque and Zia Park in Hobbs all have race dates scheduled for 2021, but those dates could be up in the air if the casinos do not open.

The decision to cancel the Sunland season has many people concerned about the future of racing in the state.

With the rest of the state’s racing year up in the air, trainers and owners have expressed their doubts about their return.

“I think it could be years before people will commit to racing in New Mexico,” said trainer Todd Fincher, who has moved his racing operation to Sam Houston. “The entire state has been devastated by bad decisions from the governor. If and when racing does come back, people will never commit to racing there like they did before.”

Trejo warned that those apprehensions are justified, particularly when it comes to the dependence on casino revenue.

“The focus of the commission is to open up racing,” Trejo said. “But there’s a long-term impact as well for horsemen and breeders. We’ve had to figure out ways to get through these unforeseen times.”

The shutdowns of racetracks across the state also have had a dramatic impact on the state’s lucrative breeding industry.

Dwain Grissom, representing Tom and Sandy McKenna's Judge Lanier Racing Stables, noted the reluctance of prospective owners and breeders to lay down roots in New Mexico because of the disadvantages of taking their horses across the state line.

“If you have to go out of state with a New Mexico-bred, you’re automatically at a disadvantage,” Grissom said. “The whole future of the business is going to remain pretty bleak unless some changes are made in a hurry.”

Grissom oversees breeding operations for one of the McKennas’ top stallions. Conquest Mo Money won two stakes during his 3-year-old campaign in 2017 before finishing second in the Sunland Derby and Arkansas Derby.

“If (mare owners in New Mexico) can’t race here in the state and get the benefit of racing against New Mexico-breds, then there’s no future for them,” Grissom warned.

The McKenna family has transferred much of its racing operation to Turf Paradise in neighboring Arizona.

Owner-trainer Justin Evans, regarded as one of the leading horsemen in the region, also moved his operation to Turf Paradise, where he is atop the current trainer standings.

Evans' concerns are with the integrity of racing in New Mexico and the availability of grooms and trackside personnel to fully operate in the future.

“What happens if and when these tracks do reopen but they don’t have the people to run a season? Valets, gate crews, a lot of those people have or will likely relocate due to the shutdowns last year and still going on,” Evans said. “The trickle-down effect will cause even more people to lose confidence in the way things are run.”

Trejo admitted that there are a great many obstacles to overcome, both currently and in the future, before racing ever returns on a year-round basis in New Mexico.

"The tricky part is the light switch where all the counties could reopen at the same time,” Trejo said. “If they don't, then it hampers the ability to open up casinos at once. The negative ramifications have not only had an effect on our industry but others as well within the state.”