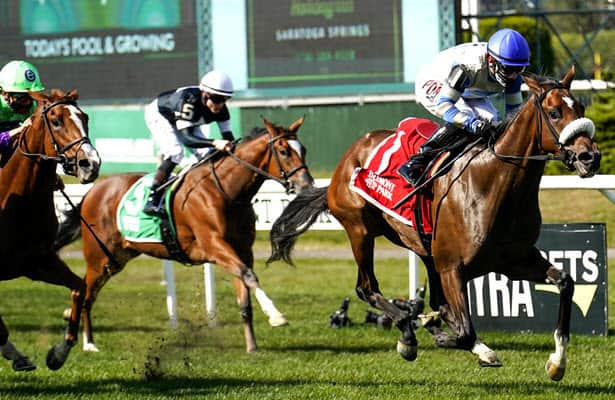 Sail By will pursue her second career stakes score as part of an overflow field of sophomore fillies in Sunday’s Grade 3, $150,000 Pebbles going one mile over the inner turf at the Belmont at the Big A fall meet at Aqueduct.

Get expert picks for Belmont at the Big A

Trained by Leah Gyarmati, Sail By was an upset winner of last year’s Miss Grillo (G2) in October at Belmont Park, defeating eventual Grade 1 winner McKulick. The bay daughter of Astern brags field-high earnings of $223,900 and a consistent record of 8: 2-1-3.

This season, Sail By registered black type when finishing a pacesetting third behind next-out winners Consumer Spending and Pizza Bianca in the Memories of Silver on April 24 at Aqueduct before rounding out the trifecta in the Soaring Softly (G3) one month later at Belmont Park. She enters the Pebbles off a troubled sixth in the Lake Placid (G2) on Aug. 20 at Saratoga.

“She’s doing great. She came out of that race in good order. She got a little flat at the end of that race, so maybe the mile will be better for her,” Gyarmati said. “At the break, she broke a little awkwardly with her head up in the air. She ran up to be second early on and then got a little flat in there. Hopefully, we will have better luck this time.”

Trainer Chad Brown, a four-time Pebbles winner, will send out a trio of fillies, including Gina Romantica, who won the restricted Riskaverse last out on Aug. 25 at Saratoga. The daughter of Into Mischief made her debut on grass in the Riskaverse, making up 10 lengths from eighth to register her third career win while springing a 14-1 upset. A debut winner in March over the main track at Tampa Bay Downs, Gina Romantica defeated winners over the Belmont main track two months later.

Faith in Humanity, second in the Riskaverse, will make her third career start for Brown. Before her stakes placing, the French-bred daughter of Lope de Vega was a debut winner on July 24 over the Monmouth Park turf course.

Bahamian Club will make her stakes debut following a one-mile allowance optional claiming score on Aug. 12 at Saratoga. The Irish-bred Kingman bay registered an 85 Beyer Speed Figure – the highest of any number recorded by Brown’s three Pebbles contestants – when defeating stakes-placed Diamond Hands by a nose in her last effort.

Lia Marina, by Uncle Mo, will make her first start since March, where she was fifth in the Herecomesthebride (G3) at Gulfstream Park. She was a second-out winner in October at Belmont, before capturing her stakes debut in the Wait A While – a race won by her dam Lira in 2013 – on Dec. 3 at Gulfstream Park.

Breeze Easy, by Bated Breath, will attempt to rebound following a disappointing sixth in the Galway on Aug. 11 at Saratoga. She made her North American debut in May when a close second in the Soaring Softly (G3) at Belmont before finishing third in the Wild Applause on June 25 over the same track.

“They’re both doing well,” said Clement’s assistant Christophe Lorieul. “Breeze Easy’s last race was a touch disappointing because turning for home, she was galloping and had plenty of horse. She made a run, but the last sixteenth of a mile she flattened out.”

A Mo Reay was third in last year’s Grade 1 Frizette at Belmont Park as a maiden and graduated two starts later going a one-turn mile at Aqueduct. The dark bay or brown Uncle Mo filly was a late-closing third in the last out Riskaverse, advancing from eighth in the final two points of call to finish 1 1/4 lengths behind Gina Romantica.

Majestic Glory will make her stateside debut, arriving off a distant eighth in the Princess Elizabeth (G3) in June at Epsom for her former trainer Andrew Balding. The Frankel bay last tasted victory when defeating next out Grade 1 winner Wild Beauty in the Sweet Solera (G3) in August 2021 at Newmarket.

*Rating is based on HRN fan votes, which rank the Top Active Horses in training.
Sail By Aqueduct Racetrack Pebbles Pebbles (2022)