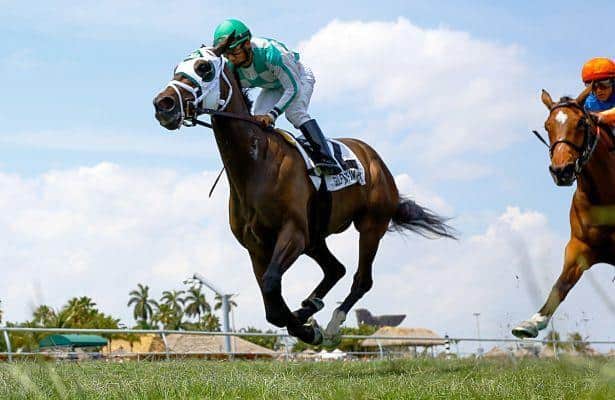 The 54th running of the 1 3/8-mile Orchid for fillies and mares 4 and older marked the third straight win for Summersault ($20), all at the Championship Meet under jockey Paco Lopez, and fifth in nine lifetime tries over the Gulfstream grass.

Maquette, in her North American debut after five races in France, raced uncontested on the lead through fractions of 23.47 seconds, 46.12, 1:10.54 and 1:35.12 chased by multiple graded stakes winner Olorda, favored at 4-5 in the field of five, and Quiet Kitten.

A spread-out field became compact as they rounded the far turn and Olorda took over the top spot, holding it past mid-stretch, but could not hold off Summersault’s steady drive to her outside. The winning time was 2:12.24 over a firm turf course.

Winning trainer Mark Hennig commented, “If you go back to the one meet that the turf was real hard at Saratoga [in 2015] she won two races. When she can hear her feet rattle over it, she does well. I was concerned about it a little when the field spread out, because when she finds daylight and is by herself she’ll kind of lose focus. I thought Paco was good and patient with her. Once he got up in behind them, I got more confident.”

Lopez added, “I know [pacesetter Maquette] was going very, very fast. My filly is always running a little more close, but I don’t push. At the half-mile/five-eighths, I ask my filly. She was coming and coming. She finished very well.”