Off since Breeders' Cup, Summering back in Laurel Park's Stormy Blues 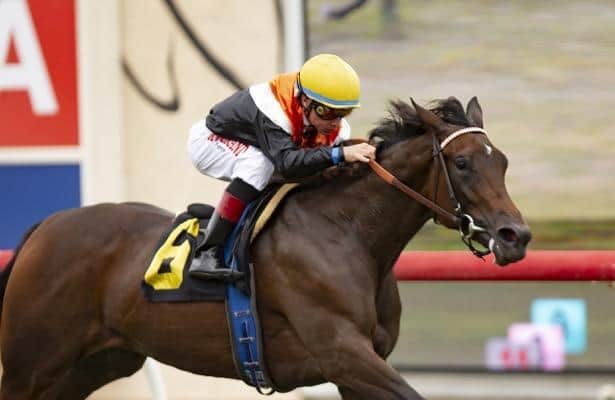 Glen Hill Farm’s stakes-winning homebred Summering, unraced since finishing off the board for the first time in last fall’s Breeders’ Cup, will launch her eagerly anticipated comeback in Sunday’s $100,000 Stormy Blues Stakes at Laurel Park.

The 5 ½-furlong Stormy Blues for 3-year-old fillies is among five stakes worth $400,000 in purses that highlight a nine-race Summer Sunday Stakes program. The Stormy Blues is one of three stakes to be contested over Laurel’s turf course, joined by the $75,000 Ben’s Cat and $75,000 Jameela for Maryland-bred/sired horses.

Sunday’s card also marks the return of multiple-graded-stakes winners Mind Control in the $75,000 Concern for 3-year-olds and Late Night Pow Wow in the $75,000 Twixt for fillies and mares 3 and up, both at seven furlongs on the main track. First race post time is 1:10 p.m.

Summering, a bay daughter of War Front, has been preparing for her sophomore debut since late June at the Fair Hill Training Center in Elkton, Md. She shows three published works, most recently breezing six furlongs in 1:13.40 over the all-weather surface July 6, after spending the winter and spring in southern California.

“She went to Santa Anita with the thought of racing there this spring,” Glen Hill president Craig Bernick said. “She had a setback that took some time.

“She was going to probably miss the San Clemente (Grade 2, July 20 at Del Mar), even though it’s a couple weeks from now. It was going to be too tough a race off the layoff, so we decided to take her back east and she’s settled in well at Fair Hill.

“She’s a nice filly. She was a big 2-year-old but she’s matured and filled out from 2 to 3,” he added. “It’s late to get her started but she had that setback so we’re excited to get her going and hopefully she can have a nice second half of the season.”

Summering made her first three starts on the West Coast, all as the favorite. She was a front-running five-length winner of her debut last July, then captured the Juvenile Fillies Turf Stakes by 1 ¼ lengths, both at Del Mar. She lost for the first time when third by 1 ½ lengths in the Surfer Girl Stakes in October at Santa Anita behind next-out stakes winner Lakerball.

Despite the setback, Summering was pointed to the Breeders’ Cup Juvenile Fillies Turf on Nov. 2 at Churchill Downs, which was inundated with inclement weather. Though each of Summering’s first three races came over firm ground, the connections decided to take a shot and it backfired in a 13th-place finish.

“Her first two races she won and then she was the beaten favorite at Santa Anita, but she didn’t run her race,” Bernick said. “She was supposed to overwhelm them. She broke bad, all the jockeys rode her, and she didn’t get a chance to run her race. We were excited going to the Breeders’ Cup. The weather was shocking; in hindsight, we shouldn’t have run, but we were there, and it was going to be her last run of the year, anyway, so we tried just in case she handled it, but she didn’t.

“We gave her two months off, which we tend to do, but then in her comeback at Santa Anita she popped a split more than you’d want, so we stopped on her and it took about 6-8 weeks to get over that,” he added. “She’s been in a normal routine, progressing, since then, and she’s ready to start.”

The Stormy Blues will be the shortest race to date for Summering, whose first four starts each came at one mile. Feargal Lynch is named to ride from Post 8 in a field of 13 at co-topweight of 122 pounds.

“We don’t generally like to run horses in stakes off a layoff, but we were interested in running her the 5 ½ because it’s a good place to start her off for the year,” Bernick said. “It wouldn’t obviously be her goal for the season, this first race, but we’re looking forward to getting her started. I wouldn’t be expecting her to win it but I wouldn’t be surprised if she didn’t run pretty well because it’s a long stretch and they should run away from there and we know she’ll be finishing. We’re excited, mostly just to get her going.”

Summering raced on or near the lead in each of her first three starts but could find herself chasing the early speed in the Stormy Blues despite racing for the first time in more than seven months.

“I would expect her to be off the pace, just because I expect it to be a very fast pace,” Bernick said. “She was only galloping when she was on the lead in her debut. She wasn’t rushed to the lead. A lot of times off of the layoff they’re fresh, but I would think after the first sixteenth or eighth of a mile, once she settles in to her race, I’d expect them to run away from her and I think she’ll be finishing. We’ll see.”

A pair of horses that could figure into the early pace are Introduced and Ying Yue. Colts Neck Stables’ Maryland-bred Introduced has been first or second in five of her six career starts, the exception coming in her only previous stakes start, the one-mile Hilltop on May 17 over a Pimlico Race Course surface that had been softened by rain.

For her next start, trainer Jorge Duarte Jr. sent her to Laurel for a 5 ½-furlong restricted allowance June 1, where she rated off the pace before taking a commanding lead into the stretch and going on to win by 2 ¼ lengths in a Dahlia turf course record 1:00.55, her first try against older horses.

“At Pimlico we tried to run her two turns and it didn’t really work out,” Duarte said. “She got washed out in the paddock. We did a little change in tactics. We took her with a pony into the paddock and cut her back to sprinting, which I think is her game, and she ran so big.”

“The spot was a little bit close to the race at Pimlico but it was kind of like a confidence booster because she’s a Maryland-bred and we thought it would suit her timing-wise, getting that race in and hoping she would do like she did, win the race and then go into this one instead of waiting and being too close to the stake,” he added. “I think it worked out perfect for us.”

The connections also considered stakes at Saratoga and Monmouth before deciding to stay at Laurel, where Introduced is 2-for-3, her only loss coming by a nose to Nightlife in her 3-year-old debut April 18.

“I thought the first race back this year, at first it was a little disappointing but the horse that won ran a very big race that day,” Duarte said. “It was kind of like a key race. A couple horses came out of that race and did well. She’s good, so far. She had a little breeze (Tuesday) morning and she did well. She came back good, so she’s on schedule.”

“She did so good at Laurel, we’re going to stick to her routine and do the same thing we did last time,” he added. “The weather seems clear, so that helps, although she did win off the turf last year. She came out of the last race good and has done everything right. She’s into her routine and she seems to be very good sprinting.”

Smart Angle LLP’s Ying Yue will be making her stakes debut in the Stormy Blues. The Jump Start filly won one of her first four races on the dirt before being switched to turf by trainer Mark Reid, making her debut running third in the same race that marked Introduced’s season opener, finishing two lengths behind the runner-up after setting the pace.

In her most recent start, Ying Yue was able to overcome a poor start to weave her way through traffic under apprentice Avery Whisman and win the five-furlong entry-level allowance May 18 at Pimlico by a neck, beating older horses in the process.

“It was a great race,” Reid said. She kind of got herself left. It was a big field on Preakness Day with a lot of hoopla, and I thought she showed herself very well. She got started late but picked her way through and got the money and was actually leaving them when the race ended. She’s done nothing but train lights out since. It’s probably a good spot to give her a chance to get some black type.”

Reid said the plan was to get Ying Yue on grass once the course opened. She didn’t debut until Dec. 20 at Penn National, winning her unveiling as the favorite, then raced twice at Laurel and once at Parx before the spring.

“Her mother was a mare called Calamity Girl, who was a really good downhill turf sprinter at Santa Anita, placed in some stakes, moved way up on the grass,” Reid said. “She was a Stravinsky, which is short grass, so I always had it in my mind to get her over there and as soon as we had the opportunity, I took it. To me, she has moved up on it.

“Probably on the dirt she wouldn’t have gotten anything in that last race, but I think she really excels on the turf. She ran game the first time, and she ran better the second time, and I’m expecting she’s going to run better the longer we’re at it. I think she’s grass through and through,” he added. “She’s a big, strong filly that’s getting bigger and stronger, so I expect improvement and that’s what she’s showing me in the morning. I take her out and she goes in 48 and pulls up in a minute and change. I have a lot of confidence in her, which is why I passed on a couple of two-other-thans to stick her right in here.”