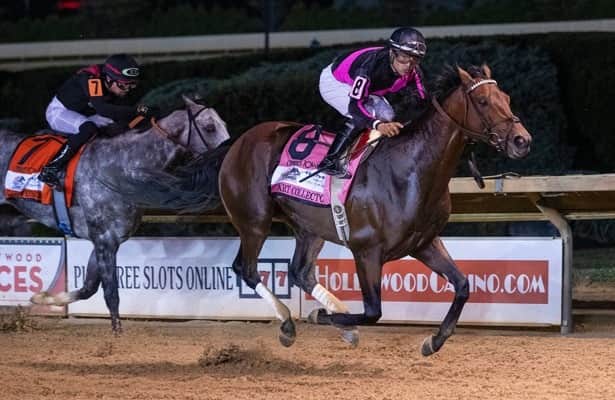 The Summer of Saez continued Friday night in West Virginia.

After riding in the afternoon at Saratoga, jockey Luis Saez flew to the Mountain State and earned a victory aboard Art Collector in the Grade 2, $800,000 Charles Town Classic. The 4-year-old Bernardini colt covered 1 1/8 miles in 1:49.39, paying $4.60 as the 6-5 favorite.

Up next is the Frank Gall Memorial at Charles Town, get to https://t.co/nBYFHj6ufh now to get involved! pic.twitter.com/q4FYdEUXZL

Saez’s victory Friday was his 22nd in a North American graded stakes event so far in 2021, with those triumphs now coming across eight different states. The jet-setting jock also earned a Dubai World Cup (G1) triumph in March in addition to his stateside exploits.

The 29-year-old leads the Saratoga rider standings and has another big Saturday ahead of him at the Spa. He rides favorite Essential Quality in the $1.25 million Travers Stakes (G1), plus five other graded-stakes starters.

Saez’s Charles Town Classic win came Friday aboard a colt in Art Collector who he piloted to victory earlier this month at Saratoga in the Alydar Stakes. That Aug. 6 score came after Bruce Lunsford’s homebred shifted barns from trainer Tommy Drury to Hall of Fame conditioner Bill Mott.

“We knew we were coming back in three weeks and that’s always a little risky when the horse runs as well as he did last time,” Mott told TVG. “But looking at his form from last year when Tommy Drury trained him, he reeled off four wins in a row and each one was four weeks. ... So we took a chance coming back on short rest and it worked out.”

2020 Charles Town Classic winner Sleepy Eyes Todd broke to the lead Friday night and set fractions of 23.8, 47.9 and 1:12.4 through the first six furlongs. Art Collector stalked that pace and sat to the leader’s outside through the race’s third turn.

Turning for home, Sleepy Eyes Todd hung tough along the rail, but Art Collector had enough to get by for the 1 1/2-length victory. Rushie and Restrainedvengence ran third and fourth, respectively.

"Art Collector gave me that kick but he was fighting in the stretch," Saez said. "It was just a great finish.”

Art Collector now sports a 14: 7-1-0 record with $1.26 million earned. As a 3-year-old in 2020, he won the Blue Grass Stakes (G2) and Ellis Park Derby before finishing off the board in the Preakness Stakes and Breeders’ Cup Dirt Mile.

The $500,000 Woodward (G1) on Oct. 2 at Belmont Park is under consideration for Art Collector’s next start, Mott said. That race is also at 1 1/8 miles, a distance at which the colt has now won four stakes events.

Rounding out the superfecta were Pauline’s Pearl, Allworthy and Caramel Swirl, the 3-5 post-time favorite.