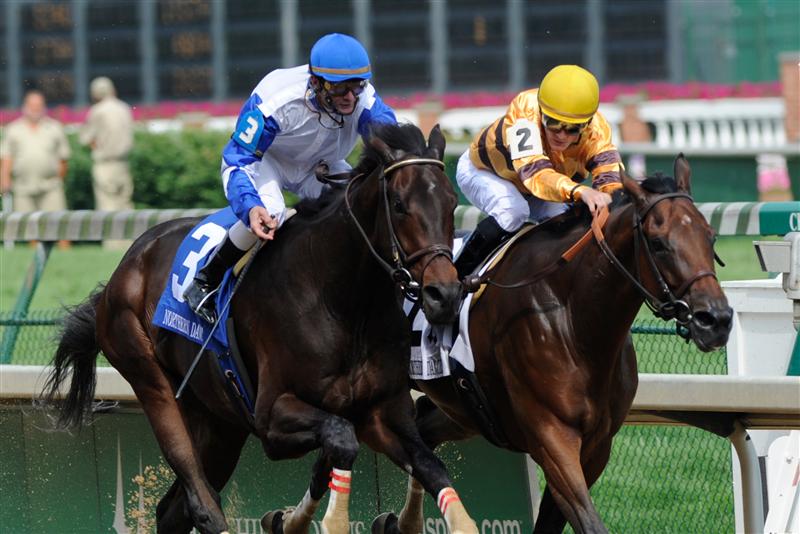 Ridden by Julien Leparoux and trained by Charles Lopresti, Successful Dan won for the second time in two 2012 starts following a layoff of 17 months because of injury.

A 6-year-old gelded son of Successful Appeal out of the Wolf Power mare Lisa Danielle, Successful Dan was making his first appearance at Churchill Downs since being disqualified from victory in the 2010 Clark Handicap (GI).

Longshot Plutonium set the pace, but was collared leaving the backstretch by Fort Larned under Javier Castellano. At the head of the lane, Fort Larned turned back a bid from Mucho Macho Man, the third-place finisher in last year’s Kentucky Derby, but could not fend off Successful Dan

JULIEN LEPAROUX (Jockey, Successful Dan, first) – “This is one of the best horses I’ve ridden so far in my career [seven wins and a second in eight rides]. He’s a beautiful horse and he has a great kick. I got him in a good place early and he relaxed really nice. When I asked him to run he gave me a great run down the stretch.”

CHARLIE LOPRESTI (Trainer, Successful Dan, first) – "I didn't know if he could duplicate his race at Keeneland (on April 6). This field worried me, but this race shows me that he's come back as the horse he was. You always worry when they come back from an injury like this. It's not so much about the win, it's seeing him come back ok. He's a great horse. He's never been beat at Churchill, he's never been beat at Keeneland. Wise Dan (full brother) will go in the Stephen Foster. We'll take our time and find another race for him. I'm definitely going to keep them apart for now."

JAVIER CASTELLANO (Jockey, Fort Larned, second) – “He held on well all the way to the end. He gave a great performance today. He gave me everything he had and I was very pleased with him.”

IAN WILKES (Trainer, Fort Larned, second) – “He’s getting better and better, isn’t he? That darn Charlie Lopresti beat me again. I thought I had him this time.”

KATHY RITVO (Trainer, Mucho Macho Man, third) – “He tried hard and ran well, but he just didn’t get there today.”

RAMON DOMINGUEZ (Jockey, Mucho Macho Man, third) – “We had no problems. I tried hard. I had a great trip. He just couldn’t get to those two horses.”