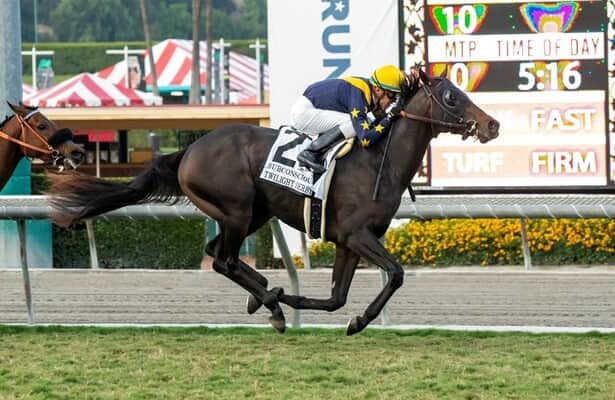 In his biggest career assignment, Richard Mandella-trained Subconscious blew by heavily favored Rock Your World turning for home Sunday and bounded to a 1 1/4-length victory in Santa Anita’s closing day Grade 2, $200,000 Twilight Derby. Ridden to victory for the third time in a row by Juan Hernandez, Subconscious got 1 1/8 miles on firm turf in 1:47.00.

Breaking alertly from post 2 in a field of 10 sophomores, Subconscious sat a comfortable second, about 1 1/2 lengths off Rock Your World into the clubhouse turn, and held his position in the run up the backside. Three furlongs from home, Hernandez angled outside while a half-length back. At the top of the lane he was in command with long shot Cathkin Peak 1 1/2 lengths back to his outside.

#2 SUBCONSCIOUS & @JJHernandezS19 close out the meeting with strong victory in the G2 Twilight Derby @SantaAnitaPark for Trainer Richard Mandella! pic.twitter.com/gEzB5dXyu0

“Mr. Mandella told me if they went too (fast) in front, just to sit behind them, because he’s getting to relax, and he runs better like that,” said Hernandez, who notched his third win on the day and his fourth stakes win of the 16-day meeting. “I just let the speed go, and he relaxed pretty well for me today, so I think that was the key, just to stay behind the speed.

“I thought for a moment (Rock Your World) was never going to stop. That’s why I put a little pressure (on him) around the half-mile to ask him to move, but my horse helped me a lot. He responded really well. When we kicked for home, he just exploded. He wouldn’t get beat by the other horses.”

A $318,000 Keeneland November Weanling Sale purchase, Subconscious is owned by LNJ Foxwoods. Gelded on June 23 following his third start, Subconscious, a 3-year-old by Tapit out of the Candy Ride mare Sweet Dreams, has three wins from six starts, all on turf. With the winner’s share of $120,000, he increased his earnings to $219,820.

When asked if he thought the gelding process has been a significant factor in the development of Subconscious, assistant trainer Gary Mandella responded, “Yes, it’s nice to see him live up to his potential now with that part of it straightened out. He’s a serious horse now. The first time we saw him, we had really high hopes for him. He had a little trouble with a knee, had a surgery, and we turned him out.

“But even if that hadn’t happened, mentally he just wasn’t there. Now he is, and he’s got it all figured out, and you can see what he’s turned into with these three (wins) in a row.”

Next to last and about seven lengths off the lead with a quarter mile to run, Irish-bred Cathkin Peak charged up the rail late in a huge effort to be second, finishing a half length in front of Beyond Brilliant. Ridden by Jose Valdivia, Jr., Cathkin Peak was off at 26-1 and paid $16 and $11.

Attentive to the pace throughout, Beyond Brilliant took up the chase for victory when Rock Your World faded a furlong from home and outfinished Hudson Ridge by three-quarters of length to pay $8.60 to show.

Ridden by Umberto Rispoli, Rock Your World, a winner of the Santa Anita Derby (1) in April and undefeated in two prior starts on grass, had no apparent excuses while finishing next to last at 6-5.