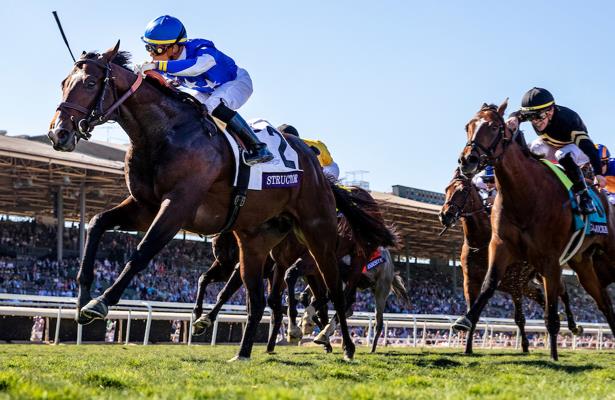 Albaugh Family Stables LLC’s Dennis’ Moment and Shooting Star Thoroughbreds LLC’s Chance It are prominent on the list of nominations for the Grade 2, $400,000 Fountain of Youth on Feb. 29 at Gulfstream Park.

The 1 1/16-mile Fountain of Youth may also mark the dirt debut for Jeff Drown and Don Rachel’s Structor, the Breeders’ Cup Juvenile Turf winner. Trained by Chad Brown, Structor was undefeated in three starts last year, following up a debut victory at Saratoga and a triumph in the Pilgrim (G3) at Belmont with a fast-closing Breeders' Cup win.

The son of Palace Malice, who closed from 11th on the turn into the homestretch to score by three-quarters of a length at Santa Anita Park, shows four works in the new year, most recently going a half mile Monday in 48.30 seconds at the Palm Meadows Training Center.

Trained by Dale Romans, Dennis’ Moment rebounded from an eventful debut, in which he clipped heels and unseated his jockey, with a spectacular 19 ¼-length victory at Ellis Park last July.  He came right back to capture the Iroquois (G3) at Churchill Downs in September. Favored at 4-5 for the Breeders’ Cup Juvenile (G1) at Santa Anita Nov. 1, Dennis’ Moment stumbled badly at the start and was never a factor.

The Romans-trained Attachment Rate, a dominating 6 ¼-length maiden winner at Gulfstream for owners Jim Bakke and Gerry Isbister has also been nominated to the Fountain of Youth.

Chance It, who made a victorious 3-year-old debut in the Jan. 4 Mucho Macho Man Stakes at Gulfstream, is also on the list of high-profile nominees. The Saffie Joseph Jr.-trained colt, who battled back in deep stretch to win the one-turn mile Mucho Macho Man, was the hero of the 2019 Florida Sire Stakes Series, in which he won the $400,000 In Reality at the 1 1/16-mile distance of the Fountain of Youth.

Gary Barber, Wachtel Stable, Pantofel Stable and Howling Pigeon Farms LLC’s Shotski, who captured the 1 1/8-mile Remsen (G2) at Aqueduct in his 2019 finale, was nominated by trainer Jeremiah O’Dwyer. The son of Blame set the pace before finishing second in the Withers (G3) at Aqueduct in his 3-year-old debut Feb. 1.

Colts Neck Stables LLC’s Big City Bob is a Fountain of Youth nominee who finished third behind victorious Tiz the Law in the Champagne (G1) at Belmont after capturing the Sapling at Monmouth Park. The son of Shanghai Bobby is trained by Jorge Duarte Jr.

Trainer Patrick Biancone is represented by Sole Volante and Ete Indien on the list of nominations. Owned by Reeves Thoroughbred Racing, Andie Biancone and Limelight Stables Corp., Sole Volante captured the Feb. 8 Sam F. Davis (G3) at Tampa Bay Downs after finishing third in the Mucho Macho Man. Linda Shanahan and partners’ Ete Indien, more likely of the two to appear next at Gulfstream, set the pace in the Feb. 1 Holy Bull (G3) at Gulfstream before finishing second behind Tiz the Law.

Screen Door Stables LLC’s As Seen On Tv, who finished a head behind Chance It in the Mucho Macho Man, is also nominated to the Fountain of Youth. The Kelly Breen-trained son of Lookin At Lucky captured the Juvenile Sprint for Florida-breds at Gulfstream Park in his previous start.

A trio of Todd Pletcher-trained recent maiden winners, Palm Springs, Candy Tycoon and Texas Swing are on the list of Fountain of Youth nominees.

Godolphin LLC’s Lake Avenue, who captured the Demoiselle (G2) at Aqueduct in December, tops 26 nominations for the Davona Dale (G2), a one-turn mile for 3-year-old fillies.