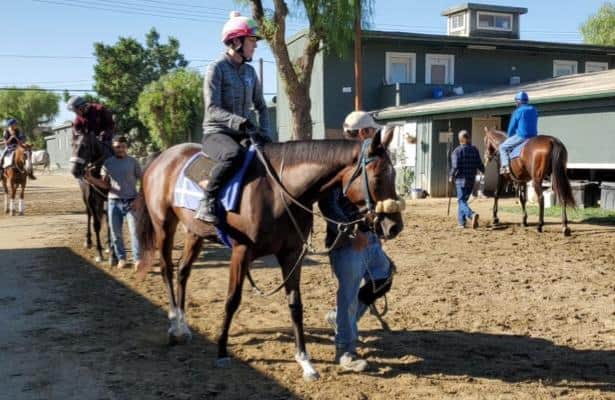 Motherhood hasn't always been kind to champion racemare Zenyatta. Since her retirement in 2010, the Racing Hall of Famer has suffered the loss of three foals, most recently in April 2018 when her foal by Into Mischief had to be aborted. Of Zenyatta's two babies to have made the races, colts Cozmic One and Ziconic both failed to win a race in 17 combined starts.

Given that track record, it's understandably with guarded optimism that trainer John Shirreffs spoke about his stable's addition of Zellda, Zenyatta's 2-year-old filly by Medaglia d'Oro. Zellda arrived at Shirreffs' Santa Anita Park shedrow last week and will receive a slow introduction to racetrack life, Shirreffs said. On Wednesday, Zellda went to the track with rider aboard at about 9:30 a.m. for an easy spin around the Santa Anita oval. Such exercise will be the typical routine for Zellda at least for the foreseeable future. “I don't think she did much breezing back at the farm, so we're probably going to spend three weeks I'd say just getting her used to going around the track,” Shirreffs said. “But also getting her to settle as well. She is a pretty strong filly. We want to make sure she's quiet out there before we start breezing.”

Meet ZELLDA by Medaglia D’oro out of Champion Zenyatta - now housed in the John Shirreffs Barn in the care of Mario who of course knows something about her mum! @santaanitapark @WatchXBTV #Zelda pic.twitter.com/V5ho7x1O2z

Zellda will campaign as a homebred for Jerry and Ann Moss, the owners of Zenyatta. The Mosses have had to endure more than their share of equine heartache since Zenyatta's broodmare career began in 2011. After successfully foaling and weaning both Cozmic One and Ziconic, Zenyatta next gave birth to a filly by War Front named Z Princess. She had to be euthanized as a weanling in 2014after suffering a paddock accident. Zenyatta was given the following year off from breeding duties. She next foaled a colt by War Front in April 2016. Two days after birth, the colt succumbed to meconium aspiration syndrome. Zenyatta successfully produced Zellda in 2017 and was bred back to leading sire Into Mischief. In another tragic turn, that foal had to be aborted in April 2018 due to placentitis, a condition that's estimated to impact from 3 to 5 percent of Thoroughbred pregnancies. Zellda will be the next to try and carry the torch of her legendary mother on the racetrack. Zenyatta lost just one time in 20 career starts while earning multiple championships for Shirreffs and the Mosses, including three straight older female titles and  2010 Horse of the Year. She was inducted into the Racing Hall of Fame in 2016. Shirreffs noted Zellda isn't particularly robust like her mother or two siblings to race, particularly Cozmic One. “She looks very nice, but she's not big like her mother,” Shirreffs said. “She does have an attitude like her mother, though. Strong and opinionated.”

Zellda displayed a touch of that personality when acting up slightly for a brief moment on her way down the horse path for her morning jog. But Shirreffs also likes the idea of Zellda being the first filly by Zenyatta that he has trained. He thinks she may be a little more receptive to the regiment of being a racehorse than were her older siblings. “I think maybe her size will work to her advantage,” Shirreffs said. “You know Cozmic One especially was very big. But I think fillies sometimes are a little more willing to be trained. They might not be quite as independent as colts are. Instead they usually tend to kind of bond and play along.” Cozmic One, by Bernardini, was winless in five starts for Shirreffs over three seasons and was retired. He serves as a show horse and “ambassador” for the Retired Racehorse Project. Ziconic, by Tapit, was winless in 12 starts and was retired in June to California's Templeton Farm with a hunter/jumper career possibly ahead. Connections anticipate that similar to Cozmic One in Kentucky, Ziconic could serve as an ambassador in California and beyond. Zenyatta was not bred in 2018 and is currently carrying a foal by Candy Ride.   Editor's note: Updates were made to the original story with more information on the current status of Cozmic One and Ziconic.
Zellda Zenyatta