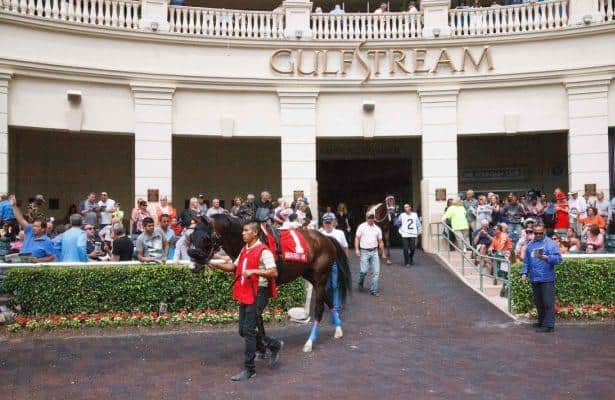 During a Tuesday morning session of the Thoroughbred Owner Conference at Gulfstream Park, Mr. Frank Stronach, the founder and honorary chairman of The Stronach Group, presented a business proposition that would lead to the creation of the world’s richest thoroughbred race in history.

The $12 million Pegasus World Championship, a 1 ¼-mile race on dirt, would be held at either Gulfstream Park or Santa Anita in mid to late January, thereby avoiding a conflict with either the Breeders’ Cup or Dubai World Cup.

The proposition designed to promote the sport of thoroughbred racing while creating lucrative opportunities for owners of World Class Thoroughbreds is based on attracting 12 equal shareholders who will each invest $1 million into the venture. The 12 shareholders will have the opportunity to lease the facilities of Gulfstream Park and Santa Anita to stage the Pegasus World Championship, which is anticipated to become an annual event that will generate excitement and worldwide attention for Thoroughbred racing.

The 12 shareholders will have the opportunity to lease the facilities of Gulfstream Park and Santa Anita to stage the Pegasus World Championship.

Each shareholder will be entitled to one spot in the Pegasus World Championship Race for each share that they own.

If a shareholder does not have a suitable horse for the race they can make arrangements with any other horse owner (i.e. Lease or Sharing of the Purse) and race that horse in their spot.

The original shareholders will have the 1st option to participate in future Pegasus World Championship races.

The Stronach Group will underwrite the race to make sure it is conducted to the highest standards.

The Stronach Group will also guarantee that all income including the handle of the race, media rights, and sponsorship less expenses will be split 70% shareholders and 30% Stronach Group.

There will be meetings held with prospective shareholders to fine tune the program and make sure there are no misunderstandings.