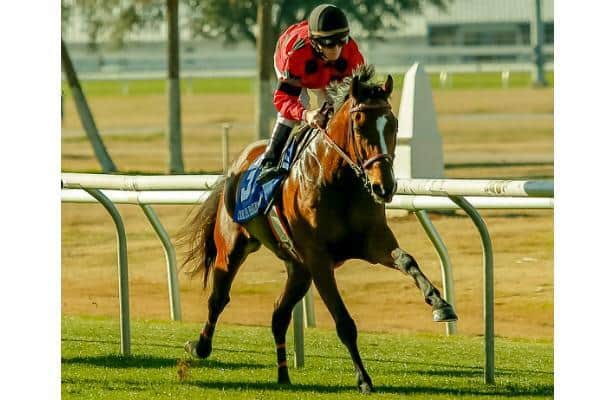 Charles C. Smith’s 13-time stakes winner String King will attempt to claim his fourth victory in the $100,000 Louisiana Champions Day Turf on Saturday, Dec. 12, at Fair Grounds Race Course & Slots for his breeder-owner-trainer against a field of nine other Louisiana-bred foes in the 1 1/16-miles grass event. The Turf goes as the sixth race on a 13-race Louisiana Champions Day card presented by Acadian Ambulance.

A six-time winner over the Stall-Wilson turf course, 7-year-old String King won the Turf in 2011, 2012 and 2014 – with his only absence being when he competed and finished second by a nose to Sunbean in the Classic in 2013. A four-time stakes winner in 2015, the Fair Grounds fan favorite will break from the rail under Richard Eramia and carry top-weight of 124 pounds under the allowance conditions. String King’s biggest challenge is likely to come from Ballybrit Stable’s stakes-winning sophomore Gallery, from the Mike Dini stable. A winner of the $95,000 Manila Stakes at Belmont going one mile in July, the well-traveled son of Munnings has kept talented company while competing in open stakes in Pennsylvania, New York, Minnesota and Maryland. The chestnut will break from post four under Mitchell Murrill.

Whispering Oaks Farm’s Cajun Conoseir goes for her third stakes victory in four career starts for trainer Steve Flint. The daughter of Closing Argument was a runaway winner last out in the $50,000 Louisiana Cup Juvenile Fillies at Louisiana Downs, but must overcome a four-month layoff to be successful on Saturday when she breaks from post three under Gerard Melancon. The likely suspects standing in her way come in the form of Roger G. Smith’s Smittys Cougar and Panic Stable’s Conquest Tiz One. The former, a well-bred daughter of multiple stakes-winning turf sprint mare Smitty’s Sunshine and top Louisiana sire Half Hours, exits a solid victory in statebred allowance company at this trip on Nov. 19 for trainer Ron Faucheux. The latter makes her first start for meet-leading conditioner Mike Stidham after being purchased at Keeneland’s November Sale for $100,000. A maiden in two starts for previous trainer Mark Casse, the daughter of Tiz the One has finished second in both starts, which came in open company at Woodbine and Keeneland, respectively.

Derby Radar: Known Agenda romps in Gulfstream allowance
After a disappointing effort as the favorite in th...