String King Back on Turf in Bradley 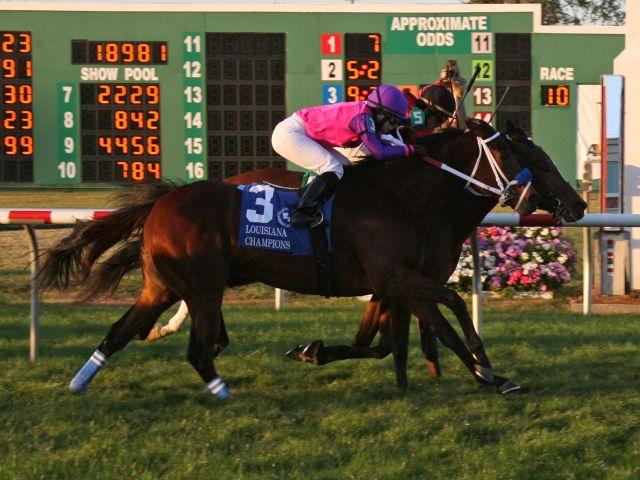 Charles Craig Smith’sString King, runner-up in last year’s renewal of Saturday’s Grade III Col. E. R. Bradley Stakes over the Stall-Wilson turf course at Fair Grounds Race Course & Slots, will try to make amends for that defeat this Saturday when he faces Cathy and Bob Zollars’ Daddy Nose Best, winner of Fair Grounds’ $75,000 Diliberto Memorial Handicap Dec. 21 and a full field of others including some cross-entered horses who are expected to defect if the Col. Bradley remains on the grass.

The Col. Bradley, one of two Grade III events on Saturday’s Road to the Derby program along with the $200,000 Lecomte for 3-year-olds, is the first of Fair Grounds’ three-race series for older grass horses that continues with the Grade III Fair Grounds Handicap Feb. 22 on Louisiana Derby Preview Day and concludes with the Grade II Mervin Muniz Memorial Handicap March 29 on Louisiana Derby Day.

Moyglare Stud Farm’s Irish-bred Speaking of Which, assigned 120 pounds,can be expected to be extremely dangerous in the Col. Bradley.  Trained by French-born grass guru Christophe Clement, Speaking of Which invades from South Florida where he won Calder’s Grade III Tropical Turf Handicap at last asking Dec. 7.  Shaun Bridgmohan is named in the irons.

Maribel Ruelas’ Potomac River, who won Churchill’s Grade III River City Handicap in a 45-1 upset, defeating Daddy Nose Best in the process, cannot be discounted despite the 121 pounds assigned.  The Jose Camejo trainee will be ridden by J. P. Vargas.

Diamond Racing et al.’s Adios Nardo, runner-up to Daddy Nose Best in the Diliberto Memorial and a winner over a yielding Stall-Wilson course here Nov. 30, merits consideration. He is trained by Leo Gabriel Jr. has named Mark Guidry to handle the reins with 116 pounds.

Zayat Stables’ Prayer for Relief, 6 ¼ length hero of Fair Grounds’ $75,000 Tenacious Handicap Dec. 21, looms a strong choice despite having to shoulder the top impost of 123 pounds in Saturday’s listed $100,000 Louisiana Handicap.  Rosie Napravnik will handle the reins on the Steve Asmussen trainee.

Maggi Moss’s Grand Contender, trained by Tom Amoss and to be ridden by Miguel Mena, was second to Prayer for Relief in the Tenacious and gets in with 118 pounds.

Calumet Farm’s Channel Lady, trained by Larry Jones and winner of Colonial’s Grade III All Along last June, is next in the weights at 119 pounds including Kerwin Clark and appears to be another of the major players.

Lothenbach Stables’ Eden Prairie winner of the $75,000 Pago Hop here Nov. 29, is in the weights with 118 pounds and cannot be discounted.  She is trained by Neil Pessin and will be ridden by Rosie Napravnik.