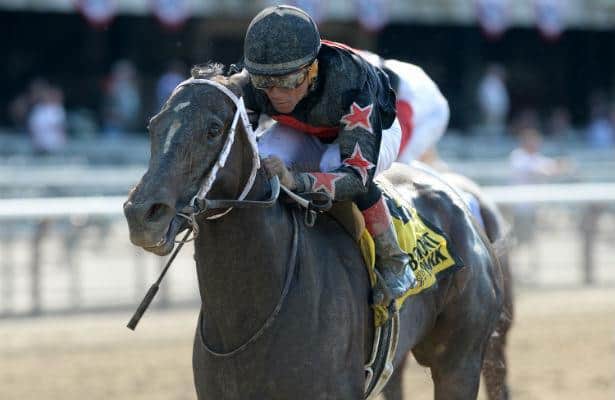 Trainer Steve Asmussen, who sent out Untapable to victory in the Grade 1 Mother Goose on Saturday, won a second graded stakes over the weekend when Street Story rallied to win the Grade 3, $150,000 Victory Ride for 3-year-old fillies on Sunday at Belmont Park.

Street Story broke last in the field of seven under jockey Joel Rosario, and settled behind a torrid pace set by Red Velvet of 21.48 seconds for the opening quarter-mile and 44.39 for a half. The daughter of Street Cry hugged the rail into the stretch, and once given her cue by Rosario, unleashed a devastating rally to win by 1 ¾ lengths.

"I saw there was a lot of speed, and I was right," said Rosario. "In a couple of races she had come from off the pace, and that was the reason why I thought she'd have a good chance. I saw [Miss Behaviour] starting to slow down, and [Street Story] kept fighting and fighting. Going past the eighth pole, I thought I had a good chance to win the race."

Street Story, who won the Instant Racing at Oaklawn Park in her last start, entered the Victory Ride off a layoff of two and a half months.

"She's been [at Belmont] for about a month and a half," said Toby Sheets, assistant to Asmussen. "We freshened her up and gave her three breezes here. She's been doing really, really good; she likes it here, obviously."

Miss Behaviour, trained by Phil Schoenthal for Cal MacWilliam and Neil Teitelbaum, ran valiantly to hold on for second after tracking the rapid early pace. It was another 1 ½ lengths back to Milam in third, who finished a nose in front of favored Red Velvet.