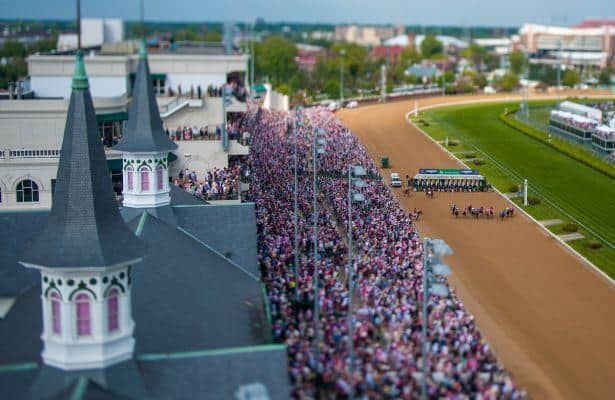 Racing’s future stars will step into the spotlight as Churchill Downs Racetrack opens its 21-day Fall Meet on Sunday, Oct. 30 with its now-traditional “Stars of Tomorrow I” program devoted exclusively to races for 2-year-old Thoroughbreds. The stellar juvenile showcase includes a pair of $80,000-added overnight stakes races in the fourth runnings of the Street Sense for colts and the Rags to Riches for fillies.

Those one-mile stakes events will share the spotlight on the 12th annual “Stars of Tomorrow I” kick-off with the inaugural running of the $300,000 Spendthrift Stallion Stakes, a seven-furlong race for 2-year-olds sired by any active or non-active Spendthrift stallion, including all Spendthrift-owned stallions standing regionally in North America.

The Rags to Riches is scheduled to open the stakes activity as the fourth of 10 contests on the “Stars of Tomorrow I” opener that begins at 1 p.m. (all times Eastern). Post time for the Rags to Riches is 2:30 p.m., while the Street Sense is the eighth race with a scheduled post time of 4:30 p.m. and the field for the Spendthrift Stallions Stakes, set as the ninth race, is scheduled for 5 p.m.

The Mark Casse-trained Speedmeister, a son of 2012 Kentucky Derby runner-up and first-year sire Bodemeister, was the favorite in his career debut at Keeneland on Oct. 9 and justified the faith of his supporters with a 4 ½-length triumph. Jockey Julien Leparoux was in the saddle for Speedmeister’s debut victory and will be back aboard the stablemate of Classic Empire as he breaks from post five in the Street Sense.

McCracken rallied from off the pace to score an emphatic 2 ½-length victory under Brian Hernandez Jr. in his Oct. 2 racing debut at Churchill Downs. The Ian Wilkes-trained son of champion Ghostzapper will break from post two in the Street Sense.

Singing Bullet, a two-length winner for trainer Dale Romans in his debut at Ellis Park on Sept. 2, finished a troubled sixth of 12 in his subsequent start in the Breeders’ Futurity. Corey Lanerie will be the third jockey in as many starts to ride Singing Bullet when he guides the son of Hard Spun from post six in Sunday’s race.

Other likely contenders in the Street Sense include Joey Keith Davis’ Balandeen, a Bernardini colt who has reeled-off back-to-back wins at Del Mar and Churchill Downs for trainer Chris Hartman after disappointing runs in his first two career outings; William S. Farish and Mrs. W.S. Kilroy’s Guest Suite, who rallied from well off the pace to win a 1 1/16-mile maiden race on Oct. 16 at Keeneland; and Arindel Farm’s General Obvious, a son of first-year sire Dialed In who ships to Churchill Downs following a maiden win for veteran trainer Ronny Werner at Florida’s Gulfstream Park.

Lovely Bernadette has run on a different track in three previous races that include triumphs at Keeneland and Churchill Downs following a third-place run in her career debut on the synthetic Polytrack surface at Arlington Park. Albarado, who was in the saddle for her previous victories, will ride the daughter of Wilburn for trainer James DiVito.

Trainer Wayne Catalano’s Farrell rolled to a five-length victory in her most recent outing in an Oct. 1 Churchill Downs maiden race. The daughter of Mizzen Mast had finished fourth in her Sept. 17 debut at the Louisville track in a race that has seen its top four finishers win in subsequent races. Channing Hill, who rode the filly in her previous two starts, will be back in the saddle.

Other contenders include Elm Racing LLC’s Holiday’s Angel, a Brad Cox-trained daughter of Harlan’s Holiday who rolled to a 5 ½-length win in her second career outing at Churchill Downs; Godolphin Racing LLC’s Maluku, a Street Cry filly with a record of 1-2-0 in four races; and Ed Wright Cattle Co.’s Naughty Little Nun, a romping 7 ½-length winner in her debut on dirt at Indiana Grand following a pair of disappointing runs on turf.

Sunday’s “Stars of Tomorrow I” opener at Churchill Downs is the first of 21 days of racing in a meet that will conclude on Sunday Nov. 27.