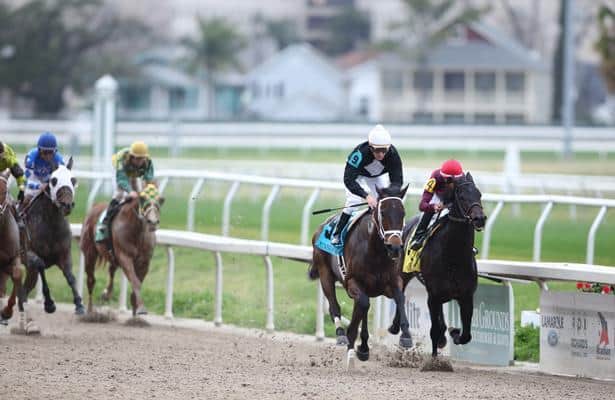 Last Saturday’s Grade III $125,000 Mineshaft Handicap not only produced a thrilling finish, but for many derived an unexpected one when Anstu Stable’s Street Babe – at 21-1 – ran down Jed Cohen’s 17-1 Argentinian Group I winner Mystery Train in the final sixteenth. Trained by former Todd Pletcher assistant Michael Dilger, Street Babe was making only the third start of his career and the hulking son of Street Sense relished every foot of Fair Grounds’ famously long stretch. According to Dilger, the dark bay gelding is likely to return for the Fair Grounds handicap division’s marquee race, the Grade II $400,000 New Orleans Handicap on Mar. 28.

Likely to join him is his game, but defeated, Darrell Vienna-trained rival Mystery Train. Carving out impressive fractions – including a sharp half-mile in :46.97, the two-time Group I winner returned to good form after three flops in California in top company. He is now slated to return, if all goes well, according to his conditioner, who cited that the Fair Grounds main track is much more similar to those to which the eight-time winner was accustomed in Argentina.
Third in the Mineshaft, Twin Creeks Racing Stables’ 8-5 beaten favorite Red Rifle is possible to return on Mar. 28, but for which race is not certain. A stakes winner on both dirt and turf who requires a distance of ground to be at his best, it would not be a surprise to see the son of Giant’s Causeway return to the grass in the Grade II $400,000 Mervin H. Muniz, Jr. Memorial Handicap in lieu of the New Orleans. A length astern said Pletcher trainee was locally based 11-1 shot Cougar Ridge, who ran admirably despite a big step up in class from allowance optional claiming company for JBL Thoroughbreds and trainer Doug Matthews.
The disappointment of the Mineshaft was Donegal Racing’s Wayne Catalano-trained 4-1 second choice Irish You Well, a massive horse making his first start since August who likely needed the race for fitness purposes. Fourth in the Grade I $1,000,000 Haskell Invitational in his prior start, the son of Broken Vow made a brief bid at the top of the stretch but flattened out under Florent Geroux. The emblazoned chestnut is definitely one to watch if he returns in five weeks’ time for the New Orleans.
Aside from the Mineshaft, other notable older horses to keep an eye in moving toward the New Orleans include the Louisiana-bred duo of Brittlyn Stable’s Ron Faucheux-trained Sunbean and Kenneth and Sarah Ramsey’s Joe Sharp-trained One King’s Man. Neither have been confirmed for the New Orleans, but it is on their respective radars after finishing third and first, respectively, in the $200,000 Louisiana Premier Night Championship at Delta Downs on Feb. 7. Last year, Sunbean was third in the New Orleans behind Eclipse Award finalist Palace Malice, while rival One King’s Man has recently come to career-form for his young and talented conditioner.
Two Fox Hill Farm-owned older horses from the red-hot barn of Larry Jones recently returned to the track in Coup De Grace and Normandy Invasion. The former is closer to a race and currently looking for a sprint to start his campaign, while the latter is recovering from a fractured sesamoid and subsequent surgery this fall and winter and is pointing toward an ambitious Breeders’ Cup-bound campaign for the owner who considers him one of the best ever to wear the red and white Fox Hill quarters. Last year, Normandy Invasion was a game second in the New Orleans, while multiple graded stakes-winning sprinter Coup de Grace has yet to prove himself around two turns, but his connections plan on attempting such if all goes well this year with the regally bred son of Tapit (also the sire of Normandy Invasion).

Speaking of last year’s New Orleans and the powerhouse performance of Palace Malice, one must ponder which Pletcher trainee fits the mold of a horse he would possibly send for the New Orleans. In this, and admittedly based in pure speculation, the immediate candidate is WinStar Farm’s Commissioner. Second in last year’s Belmont Stakes – which Palace Malice won a year prior – the son of A. P. Indy looked like he needed both of his races thus far this year when finishing third in an allowance and then sixth in the Grade I $500,000 Donn Handicap behind stablemate Constitution. A long-striding type who may appreciate the aforementioned homestretch of a track like Fair Grounds, it would of little surprise to see him routed to the New Orleans oval for its namesake Handicap.