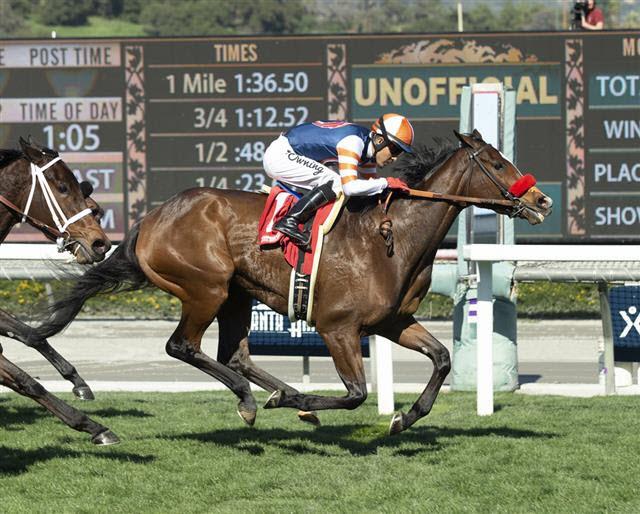 In what will be her initial stakes assignment, Little Red Feather Racing’s Opus Won, who has won two allowance races in a row and has won three out of her last four starts, heads a field of nine older fillies and mares set to go 1 1/4 miles on turf in Saturday’s Grade 3, $100,000 Santa Ana Stakes at Santa Anita.

A 4-year-old California-bred filly by Eddington, she comes off a pair of 1 1/8 mile allowance wins in which she sat close to the early lead versus open company on Jan. 1 and Feb. 2. In her most recent win, she earned a 90 Beyer Speed figure, a career best and the best last-out Beyer in the Santa Ana field. Although she’ll be trying a mile and one quarter for the first time, Saturday’s Santa Ana will feature a hillside start, which should serve to mitigate the effects of the extra furlong. With an overall mark of 10: 4-2-1, she’ll be trying stakes competition for the first time.

Originally based with trainer Chad Brown in New York, this grey filly by War Front made her Southern California debut two starts back in the Grade 1 Del Mar Oaks on Aug. 17, finishing 10th, beaten less than six lengths. Idle since, she resurfaced in a one mile turf allowance here on March 8, finishing a close second at 7-2. A two-time minor turf stakes winner, once over a yielding course at Saratoga going a mile and one sixteenth in August, 2018 and again over a good turf at Pimlico on May 17, 2019, Dogtag will no doubt vie for favoritism with a recent race to her credit.

Competitive in all three of her graded turf stakes assignments at the current Winter Meet, this 5-year-old mare by Paddy O’ Prado was second beaten a nose three starts back in the Grade 3 Robert J. Frankel on Dec. 28 at 1 1/8 miles, was second, beaten two lengths in the Grade 3 Astra at a mile and one half Jan. 19, and was most recently fifth (dq’d to eighth), beaten 3 ½ lengths in the Grade 2 Buena Vista at one mile on Feb. 22. With an overall mark of 19: 5-4-3, Tiny Tina seeks her first stakes win and would be flattered by a lively early pace in the Santa Ana.

Supplemented at entry time for $2,000, she was claimed seven starts back for $35,000 on June 8, 2019. A 5-year-old California-bred mare by Unusual Heat, Super Patriot has two wins, as many seconds and one third place finish from six starts for Baltas. With only one off the board effort for her new connections, an eighth place finish in her most recent start, the Grade 2 Buena Vista Stakes on Feb. 22, Super Patriot, who was second, beaten three quarters of a length two starts back in the Grade 3 Megahertz Stakes on Jan. 20, rates a solid chance in what will be her 28th career start.

After bobbling at the break, this 4-year-old daughter of Kitten’s Joy recovered to rally from off the pace to take a mile and one eighth turf allowance here on Feb. 17. Well beaten in her only other graded stakes assignment, the Grade 1 Del Mar Oaks on Aug. 17, 2019, she has two wins from 15 overall starts. An Amerman Racing homebred, she’s out of the multiple Grade I winning Balance, who’s two Grade I victories came on dirt.

The Grade 2 Santa Ana goes as the seven race with an approximate post time of 6:30 p.m. ET. The field in post position order with jockeys and weights: