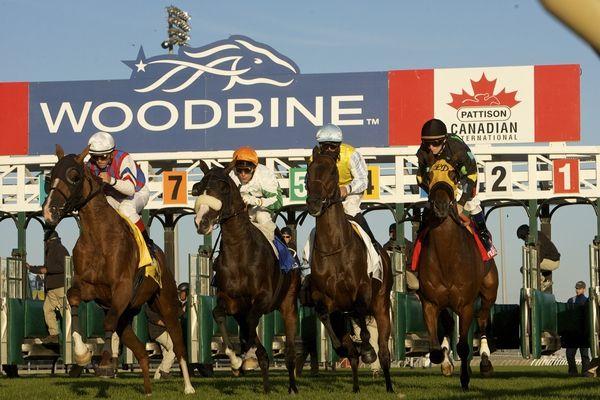 The 153rd edition of the Plate, the oldest continuously run stakes race in North America, will be televised live on CBC-TV in HD (High Definition) in a special presentation from 4:30 – 6:00 pm ET.   Post time is 5:36 pm.  Ontario’s Lieutenant-Governor, the Honourable David C. Onley, will attend the Plate for the third time, following appearances in 2009 and 2011.

All starters carry 126 pounds, except two fillies – Irish Mission and Dixie Strike, who will tote 121 pounds for the mile and one-quarter classic over Woodbine’s Polytrack.  The winner will receive $600,000.

Mark Tewksbury, Canada’s Chef de Mission for the 2012 Summer Olympics in London, England, will be the guest drawmaster when the post position draw takes place Thursday morning at Woodbine.   The selection order for post positions will be drawn first via the traditional ‘pill-pull’, followed by the choosing of post positions by the connections for each horse, a system which has been in place for the Queen’s Plate since 1998.

The morning line favourite is Canyon Farms’ Strait of Dover, trained by Dan Vella.   The son of English Channel has won his last three starts, including the May 12 Marine Stakes by six and one-half lengths.

Forced to miss the June 3 Plate Trial because of sickness, Strait of Dover has trained well since leading up to the ‘Gallop for the Guineas’ and will be ridden by Justin Stein.  Vella won the 1994 Plate with Basqueian.   The last horse to win the Marine and then take the Plate was eventual Triple Crown champion Wando in 2003.

Stronach Stables’ River Rush, trained by Reade Baker, will try to become the 26th Plate Trial winner to win the Plate.  The three-year-old son of Orientate broke his maiden in impressive fashion at 21-1 in the June 3 Trial, hugging the rail all the way around and exploding in the stretch to win by a going away five and one-quarter lengths in just his third career start.

River Rush will be ridden by Jim McAleney, who is looking for his first Plate win after twice finishing the runner-up…in 2000 with I And I and in 2002 with Anglian Prince.   Stronach Stables has won two Plates, with Basqueian in 1994 and Awesome Again in 1997.

Baker, whose best previous Plate result was a third-place finish with Gold Strike in 2005, will also send out Harlequin Ranches’ Macho Whiskey, a one-time winner in only three starts.  The son of Macho Uno will be ridden by Emma-Jayne Wilson, who is the only female jockey to win the Plate, doing so in 2007 with Mike Fox.

Irish Mission, trained by Mark Frostad for owner Robert Evans, enters the Plate off a surprising victory in the Woodbine Oaks, June 3, when, as a 9-1 shot,  she decisioned Northern Passion and Awesome Fire in the mile and one-eighth classic for Canadian-bred three year old fillies.


Corey Nakatani, who was aboard the son of Northern Afleet when he won a mile and one-eighth allowance test last month at Woodbine for owner Terra Di Sienna Stables, retains the mount.

John Oxley’s Dixie Strike, the field’s leading money winner with $500,260, most recently disappointed with a fifth-place finish, two and one-half lengths behind Irish Mission in the Woodbine Oaks, as the 4-5 favourite.   The daughter of Dixie Union, who won the Florida Oaks earlier this year on turf, will wear blinkers for the first time in the Plate and will be ridden by Patrick Husbands, who won the 2003 Plate aboard Wando en route to a Triple Crown.

Melnyk Racing Stables’ Golden Ridge, to be ridden by Luis Contreras, comes off a convincing maiden score May 13 in just his third career start.   The homebred son of Distorted Humor earlier finished second at Keeneland and third at Gulfstream Park on the turf.    Contreras won last year’s Plate aboard Inglorious while Melnyk shared ownership of 1998 Plate winner Archers Bay with R Bristow Farm.

Making Amends, co-owned by Quintessential Racing Florida LLC, Horse’n Around Racing Stable and Richard Lederman, won the Clarendon Stakes in his two-year-old debut, but is winless in nine starts since.  The son of Repent will be ridden by Eurico Rosa da Silva, who won back-to-back Plates in 2009 with Eye of the Leopard and in 2010 with Big Red Mike.   Horse’n Around Racing Stable and Richard Lederman co-owned last year’s Plate runner-up, Hippolytus.

Classic Bryce, owned and bred by Bill Sorokolit, finished third to River Rush in the Plate Trial and was the runner-up to Strait of Dover in the Marine.   Trained by Darwin Banach, the son of Grand Slam will be ridden for the first time by Todd Kabel, who has won the Plate twice – with Regal Discovery in 1995 and Scatter the Gold in 2000.  Sorokolit bred and co-owned 1997 Plate runner-up Cryptocloser.

Green Hills Farm’s Big Creek, trained by Todd Pletcher, enters off a fourth-place finish to River Rush in the Plate Trial and is a one-time winner in seven starts.   The son of Indian Charlie will be handled for the first time by one of North America’s leading riders, Ramon Dominguez.   Pletcher trained 1998 Plate winner Archers Bay.

Trainer Josie Carroll will send out a second Melnyk runner in Wilcox, a winner once in only two starts.  The son of Giant’s Causeway will try to emulate the feat of Awesome Again, who won the 1997 Plate in only his third career start.   Carroll is the only female conditioner to have won the Plate, and she’s done so twice, with Edenwold in 2006 and with Inglorious last year.    Wilcox will be ridden by Tyler Pizarro, who finished second in the Queen’s Plate last year with longshot Hippolytus.

Peyton, owned by Bill Graham’s Windhaven and trained by Mike Doyle, is a two-time winner in nine starts and was most recently fifth to River Rush in the Plate Trial.  The son of Tale of the Cat will be ridden for the first time by Julien Leparoux.   Graham and Doyle teamed to finish fourth in the 1989 Plate with Oaks winner Blondeinamotel.

Ultimate Destiny, trained by Mike Keogh for Brenda Selwyn-Waxman, has won two of his six career outings and was second last year in the Kingarvie Stakes.  The gelded son of Dance to Destiny will be handled by Steven Bahen, who won the 2002 Plate in a shocker with 82-1 shot T J’s Lucky Moon.  Keogh has trained two Plate winners – Woodcarver in 1999 and Triple Crown winner Wando in 2003.

Washington Dash, owned by Silverton Hill LLC and trained by Darrin Miller, will try to become the first maiden to win the Plate since Scatter the Gold in 2000.   The son of Smart Strike, winless in three outings, two of them on turf at Churchill Downs and Arlington Park, will be ridden by Rajiv Maragh.

Of the 14 starters in this year’s Plate, 12 of them have connections (owner, trainer and/or jockey) who have previously won the Plate.  Also of note, five of the 14 horses did not start at two.   The last Plate winner unraced as a juvenile was Eye of the Leopard (2009).

The Queen’s Plate is the first leg in the Canadian Triple Crown.  The second leg is the $500,000 Prince of Wales Stakes, at one mile and three-sixteenths on July 15 at Fort Erie, while the $500,000 Breeders’ Stakes, at one mile and one-half on the grass, August 5 at Woodbine, comprises the third and final leg.   There have been seven Triple Crown winners since the concept was inaugurated in 1959, the first being New Providence in 1959, the latest being Wando in 2003.