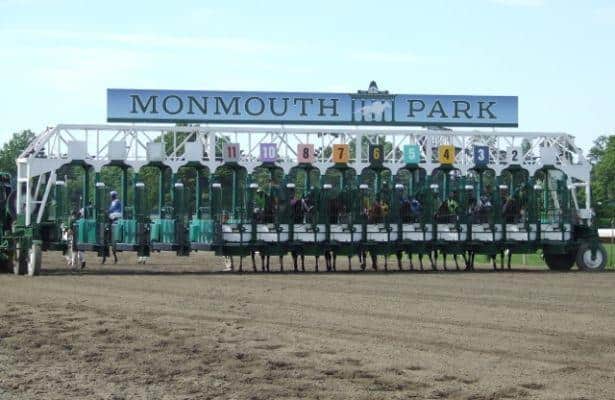 Photo: Matt Shifman
Storming My Way will look to get his first victory at Monmouth Park as well as his first career stakes win in Saturday’s $60,000 Jersey Shore Stakes, going six furlongs over the main track.
The three-year-old gelding by High Cotton exits a victory against allowance company on June 13 at Parx when he broke second, but quickly got himself on the lead in the five and a half furlong event and never looked back, winning by a length and three-quarters. Antonio Gallardo was aboard that day and will get the call once again Saturday.
“He’s coming out of a nice allowance win and has been doing well,” said trainer Eddie Plesa Jr. “This seemed like the logical spot for him and he has run well in stakes before. It will be a step up for him, but he’s ready.”
Storming My Way has hit the board in two of his three career starts in stakes races. As a two-year-old, he led heading into the stretch in the Juvenile Sprint Stakes at Gulfstream Park West before finishing second. In his first start of this year, he finished third in the OBS Sprint Stakes over the all-weather track at the Ocala Training Center.
The son of the Deputy Minister mare Picturemewithroses hasn’t worked since his allowance win. His most recent breeze came on June 3 when he went four furlongs in :50 over a fast Monmouth main track.
Owned by Donald H. Mensh and Mel Paikoff, Storming My Way broke his maiden in his third career start at Gulfstream Park West in gate-to-wire fashion. His first two starts of his career came at Monmouth Park, finishing fifth behind multiple stakes winner Sonic Mule and a second place finish, just missing by a half-length.
Three stakes winners will take their spots in the gate Saturday with Storming My Way. Two of the three took their stakes wins over the main track including Proforma, out of the Michael Stidham barn, winner of the Sugar Bowl Stakes as a two-year-old at Fair Grounds and Even Thunder, for John Servis, who got the victory in last year’s Kings Swan Stakes at Aqueduct.
The Jersey Shore Stakes is set to run as race 10 on Saturday’s 11-race card. Gates open at 11:30 a.m. with first post scheduled for 12:50 p.m.
WINE AND CHOCOLATE FESTIVAL BACK AT MONMOUTH THIS WEEKEND
Monmouth Park will once again host the Wine and Chocolate Festival this Saturday and Sunday, where patrons will be able to sample and purchase delicious wines from New Jersey’s best wineries and please their sweet tooth with many different chocolate treats, all while enjoying a day at the races.
Multiple packages are available all weekend. For $10, patrons will receive a wristband for unlimited access to wine sampling from vintners such as Cava Winery, DiMatteo Vineyards, Monroeville Vineyard,
Plagido's Winery, Sharrott Winery and more. For $7, visitors will be able sample an assortment of chocolates from Broad Street Dough Co., Gourmet Creations, Nothing Bundt Cookies, The Dessert Bar, Rocky Mountain Chocolate Factory and Goodway Bakery among others. For those who want both wine and chocolate, they can have the bundle package for just $15.
People will also be able to enjoy live music Saturday from the Nine Deez Night and The Larry Stevens Band on Sunday. Sunday will also be Family Fun Day featuring pony rides, face painters and bounce house.
Gates open at 11:30 a.m., with event festivities beginning at 12 noon and first post at 12:50 p.m. for both days.
BETFAIR.COM HASKELL TICKETS SELLING FAST FOR THE 5OTH RENEWAL
Tickets are selling fast for the 50th edition of the betfair.com Haskell Invitational, to be renewed on Sunday, July 30.
Clubhouse sections start at $25, while Grandstand seats range from $20-$25. For the Grandstand balcony, seat prices go from $13-$18. A complete Grandstand or Clubhouse box ranges from $100-$200 depending on the number of people.
Individual Picnic tables within the closed-off areas will be available to reserve. Tables trackside will cost $175 while tables in the rear will be $150.
Admission on Haskell Day, which is not included in the reserved seat price, is $8 for the Grandstand and $10 for the Clubhouse. For seniors aged 55 and up Grandstand admission is $4 and Clubhouse admission will cost $5.
Haskell tickets can be purchased by calling 732-571-5563, or by visiting the reserved seat booth (2nd floor of the Grandstand) on any live racing day. In addition, fans can pre-purchase Haskell seats directly through www.monmouthpark.com.
The Haskell is part of the Breeder’s Cup Challenge Series: Win & You’re In with the victor earning an automatic berth to the $6 million Classic.
POPULAR DAWN PATROL RETURNS THIS SATURDAY
Monmouth’s popular Dawn Patrol program, which gives fans a look into racing life behind the scenes, is set to start up this Saturday, June 24 and run all the way through Aug. 20

This year, Dawn Patrol will be held on Saturdays and Sundays, starting at 8 a.m. The free morning tour consists of a tram ride through the Monmouth Park stable area during workout hours, a close-up look at the starting gate, a tour of the jockeys’ room, which is usually off-limits to the public, and a running commentary on racetrack life by hostess Laurie Lane. Learn about the life of Thoroughbred race horses including training programs and equipment, feed programs and a variety of other topics.

Reservations are required and can be made by call 732-571-5542.
Source: Monmouth Park
Storming My Way Edward Plesa, Jr. Monmouth Park