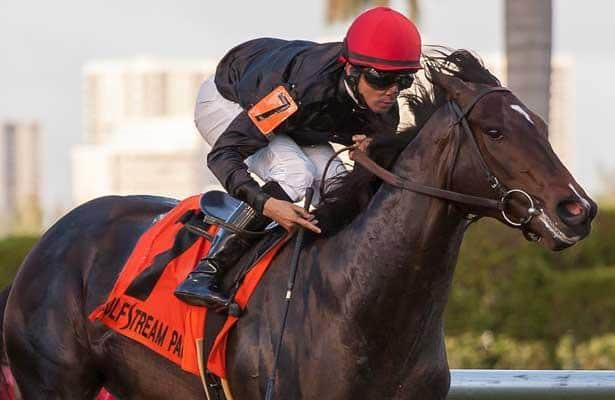 Since finishing a troubled third in his career bow last summer, Storming Inti has done nothing but win for trainer Chad Brown, putting together a four-race streak that includes three straight stakes.

The chestnut son of Stormy Atlantic will be facing his toughest test yet in the 31st running of the $150,000 Palm Beach (G3) on Saturday at Gulfstream Park, which will mark his graded stakes debut.

“He has just continued to progress,” Brown said. “He just keeps getting better and better, and I’m very pleased with how he’s doing. He has definitely earned his way into a graded race.”

Owned by Santa Rosa Racing Stables, Storming Inti kicked off his sophomore season by out-finishing Grade 1 winner We Miss Artie to take the $100,000 Kitten’s Joy at Gulfstream on Jan. 19 in his most recent effort, and stretches out from 8 ½ to nine furlongs for the Palm Beach.

It was the fifth career start for Storming Inti, who finished third in his debut at Saratoga Race Course in August after being bumped and having to steady in deep stretch. He went on to break his maiden in September before taking the Awad Stakes, both at Belmont Park.

Four weeks later, Storming Inti was a one-length winner of the Pulpit Stakes on opening day at Gulfstream, a race moved from the grass to a sloppy and sealed main track.

“In his debut he got into a little trouble but ran on well. He broke his maiden nicely at Belmont,” Brown said. “He’s a horse that always acted like a nice horse, and he’s acting like a horse that will get better as they race more and get more experience. Physically he’s developed nicely, but he has always been a nice prospect for us.”

Brown was particularly impressed with the Kitten’s Joy where Storming Inti, racing on the inside, briefly lost the lead to We Miss Artie approaching the wire before surging again to get up by a head. He will break from post one under Javier Castellano in the 13-horse Palm Beach field that includes main-track-only entrant Ring Weekend.

“Winning breeds confidence, I really believe in that,” Brown said. “Horses can get confident and get on a roll and this one, mentally, is a very strong horse. He always trains with a lot of interest. Particularly in his last race, he was very determined that day to win. He’s just been a pleasure to have in the barn.”

Brown will also saddle French import Pleuven in the Palm Beach for owners Robert LaPenta, Gary Finder and Bradley Thoroughbreds. In his North American debut, Pleuven rallied from far back on the outside to finish third, beaten 3 ¼ lengths, in the one-mile $100,000 Dania Beach (G3) at Gulfstream on Dec. 21.

“He took a little while to settle into American training, but once we got over the hump and got him into a nice rhythm with his training he’s acted like a nice horse,” Brown said. “I was thinking a mile might be a little short for him, but I figured it would be a good spot to get him started. I thought he ran well and finished well, and a mile and an eighth should be very good for him.”

Ten-time defending meet training champion Todd Pletcher has never won the Palm Beach, but will take a shot with Gala Award. The lightly raced Bernardini colt has made two starts, finishing second in his Dec. 7 debut before graduating with a game three-quarter length maiden win on Jan. 20, both at Gulfstream.

“I think a mile and an eighth suits him well,” Pletcher said. “I thought his last race was another move forward. Hopefully, he’s got another one in him.”

Gala Award was the second maiden grass winner in a week for Pletcher with a son of Bernardini, a multiple Grade 1 winner on dirt and champion 3-year-old male of 2006.

“I’m not sure why he’s shown more on the grass than he has on the dirt,” Pletcher said. “His dirt works have been improving since his last two races, but we know he handles the grass here. If something crazy happens and it comes off the turf, we wouldn’t be afraid to run him on the dirt.”

Seventh in the $400,000 Miller Lite Holy Bull (G2) on Jan. 25 in his first dirt start, Mr Speaker returns to the turf in the Palm Beach for Hall of Fame trainer Shug McGaughey. In his previous race, the Pulpit colt drew off to a 10 ¾-length win in the Dania Beach (G3) at Gulfstream on Dec. 21, and will race with Lasix for the first time.

Second to Mr Speaker in the Dania Beach, Cabo Cat came back to be a solid third in the Kitten’s Joy, closing to within 1 ¼ lengths of Storming Inti and We Miss Artie. In his only other stakes try, he was no factor in finishing sixth to Storming Inti in the Awad.

Smart Cover will make his 3-year-old debut for trainer Dale Romans in the Palm Beach, his first race since running second by a neck in the Iroquois (G2) at Churchill Downs on Sept. 7. Finishing third that day, another neck back, was Tapiture, who has gone on to win both the Kentucky Jockey Club (G2) and Southwest (G3), the latter on Feb. 17.

Moved to the turf for his last start, So Lonesome responded with a head victory in the Virgo Libra Stakes at Aqueduct on Nov. 16 for trainer Tom Bush, who upset the $75,000 Ladies Turf Sprint with Believe in Charlie on Sunday at Gulfstream.

Making their stakes debut in the Palm Beach are Two Jacks Wild and maiden winners Can’thelpbelieving, Morning Calm, My Storm Trooper and Patent.