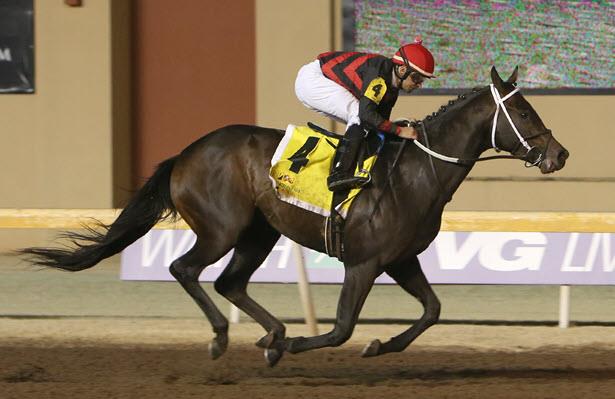 Following a sixth-place finish in the Grade 1 Arkansas Derby, Storm the Court leads an overflow field of 15 for Saturday’s $500,000, Grade 3 Ohio Derby at Thistledown.

Winner of last year's Breeders' Cup Juvenile, Storm the Court, trained by Peter Eurton, has yet to notch his first win in three starts since, with his best finish of the year being third place in the Grade 2 San Felipe Stakes at Santa Anita in March.

The Ohio Derby serves as a qualifying race for the 2020 Kentucky Derby this year, with points awarded on a 20-8-4-2 basis. Storm the Court is in 15th place on the leaderboard with 32 points.

The son of Court Vision last worked out on Saturday, a bullet six furlongs on dirt at Santa Anita in 1:12.00.

Looking to take down Storm the Court will be Rowdy Yates in his first start since finishing fourth in February’s Saudi Derby Cup. He previously has victories at the Riley Allison Derby at Sunland Park and Don C. McNeill Stakes at Remington Park. He has no points so far towards Kentucky Derby qualification.

Another contender is Tennessee Whiskey’s Dack Janiel’s, who will be looking for his first career stakes victory. Trained by Jack Sisterson, Dack Janiel’s most recently breezed five furlongs in 1:02.40 June 20 at Keeneland.

*Rating is based on HRN fan votes, which rank the Top Active Horses in training.
Storm The Court Thistledown Ohio Derby Ohio Derby (2020)