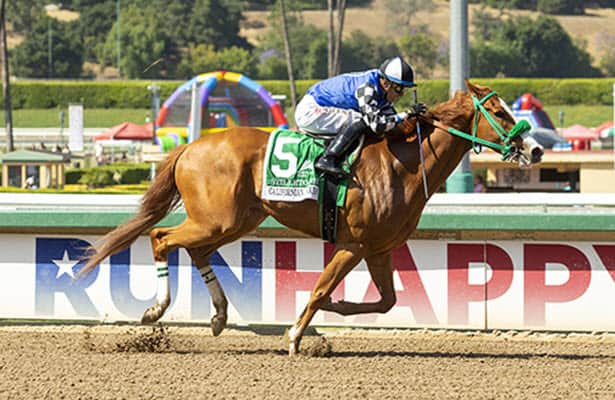 Notably absent from the 84th Hollywood Gold Cup is Express Train, who had dominated the division in Southern California for most of the winter and spring. The 5-year-old horse by Union Rags rattled off wins in the San Antonio (G2), San Pasqual (G2) and Santa Anita Handicap (G1) before being upended by Stilleto Boy in the Californian (G2). Trainer John Shirreffs is giving Express Train, who was third in last year's Gold Cup, a brief freshening before Del Mar where he's expected to again contest both the San Diego (G2) and Pacific Classic (G1).

Hernandez will again be aboard Stilleto Boy on Memorial Day. They will break from the outside in post 5. Stilleto Boy is owned by Moger's brother, Steve Moger. The gelding has a record of 15: 3-3-6 with earnings of $1,031,175.

Trainer Sean McCarthy entered a pair of runners formerly trained by the suspended Bob Baffert in Spielberg and Defunded. Spielberg was beaten almost 25 lengths by Stilleto Boy when third in the Californian. Prior to that effort, the high-priced son of Union Rags was fourth in both the Santa Anita Handicap and San Pasqual.

Spielberg drew post 3 and will be ridden by Flavien Prat.

Defunded, who was twice Grade 3-placed last year as a 3-year-old, returned from a nine-month layoff to dust allowance foes at Santa Anita May 8. Last year, the son of Dialed In was second in both the Affirmed Stakes (G3) and Los Alamitos Derby (G3), and was fourth in the Pat Day Mile (G2) and Santa Anita Derby (G1).

Graded-stakes winner Royal Ship will be making his second start off a 7 1/2-month layoff for Hall of Fame trainer Richard Mandella. The Brazilian-bred son of Midshipman, who won last year's Californian and was second in the Hollywood Gold Cup, returned April 10 and blitzed the field in the John Shear Mile at Santa Anita.

Royal Ship drew post 2 and will have Mike Smith in the irons.

Filling out the field for trainer Michael McCarthy is There Goes Harvard, who drew the rail. The 4-year-old Will Take Charge colt is coming off consecutive allowance wins at Santa Anita. His only previous stakes try was a second-place finish in the Ellis Park Derby behind Arkansas Derby (G1) winner Super Stock.

Irad Ortiz Jr. has the call on There Goes Harvard.

The Hollywood Gold Cup will go as the fourth race on a 10-race holiday program at Santa Anita. Post time is scheduled for approximately 5:30 p.m. EDT.

*Rating is based on HRN fan votes, which rank the Top Active Horses in training.
Stilleto Boy Hollywood Gold Cup