Stewart’s revving up Out for a Spin for fall campaign 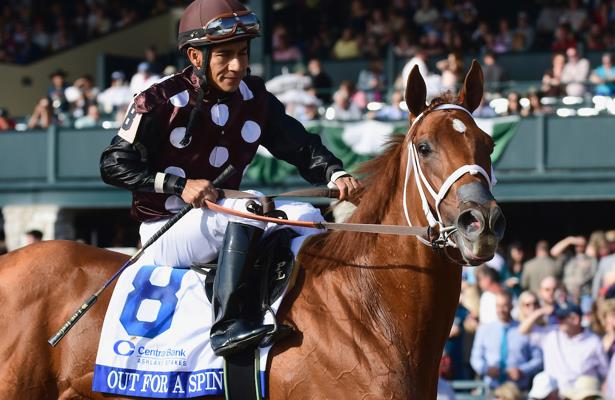 With a half-mile breeze Tuesday in 49.60, Grade 1 winner Out for a Spin put herself on course to return to the races next month at Keeneland, or perhaps the month after that at Churchill Downs.

Trainer Dallas Stewart’s in no hurry with a filly who registered a 52-1 upset as the longest shot in the April 6 Ashland Stakes (G1) field, then last appeared when 10th in the Kentucky Oaks.

“She didn’t run very well in the Oaks, so we gave her a health check — gave her a break — and she’ll get ready for a fall campaign,” Stewart said.

The daughter of Hard Spun has won three of six starts for Commonwealth Stables, Randy Bradshaw and Stonestreet Stables.

“She has conditions,” says Stewart, who will mull both stakes and allowance options for a return race. “We’ll see.

“That’s her second half,” he added of Tuesday’s work, “so we’ll just have to see as we go. It went quite well.”

Out for a Spin also shows a pair of three-furlong drills since hitting the work tab for the first time back on Sept. 3.

The filly debuted last November at Churchill Downs before wintering with Stewart’s string at Fair Grounds. She broke her maiden Dec. 29 in Louisiana, finished third next out against winners and then vaulted from a March 16 allowance victory to the Ashland.

The Ashland upset came by a neck over another Grade 1 winner, Restless Rider. Champion Jaywalk was another two lengths back in third.

Out for a Spin