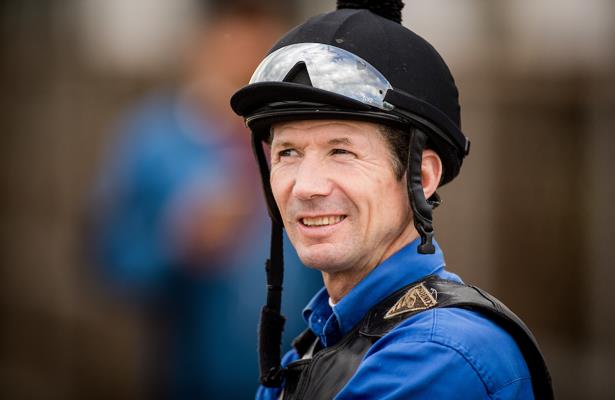 Stewart Elliott needed a break in 2015.

He had never fully recovered from a stable-area incident the summer before at Del Mar, in which a horse’s swift kick left him with two broken ribs. Beyond the physical discomfort, he was experiencing overwhelming mental fatigue.

The son of a jockey had been riding for more than three decades in a career that had taken him from coast to coast, with stops in between. The everyday routine of working horses in the morning and taking as many quality mounts as possible in the afternoon had taken its toll.

And so he stopped.

“I was kind of seeing what I could do when I didn’t ride anymore,” recalled Elliott, “because I’d been riding since I was 16 years old.”

He invested in Kentucky-based Whitetail Heaven Outfitters and became fully involved in the operation by leading hunting trips. His fame as the rider of 2004 Kentucky Derby and Preakness winner Smarty Jones, combined with his easygoing personality, made him a popular guide.

“I enjoyed it. I really did enjoy it,” Elliott said. “But I still thought I should ride.”

He felt there was more he could accomplish, and he was right. He became only the 36th jockey to register 5,000 career victories when he prevailed with Power End in the eighth race at Lone Star Park on Sunday.

The milestone is a testament to his longevity at age 55, but also to his skill. At the least, it proves he had more to give to the game.

“Sometimes you feel like you need a change,” he said. “But once you get a change, you realize, ‘Hey, man, I do pretty good riding. Let me get back to riding.’ ”

Elliott initially returned to competition in California. This year marks his first stint at Lone Star. He readily acknowledges how powerful the financial element was in spurring his comeback. He has more than $106 million in purse earnings, one of many reasons the Toronto native was inducted into Canada’s Racing Hall of Fame in 2015.

Elliott has been dueling with Ramon Vazquez for Lone Star’s riding title. He has been working primarily for Steve Asmussen, who perennially ranks among the leading trainers in North America. Number 5,000 came on an Asmussen trainee.

“It’s hard to ride for other people because he has horses in almost every race,” said Elliott, laughing. “He keeps me busy and he keeps me winning and he’s great.”

The combination clicks because Elliott continues to perform at a high level at an age when slippage might be expected.

“To be honest with you, I really haven’t seen him lose anything, and the experience factor is just unbelievable,” said Scott Hare, his agent. “When you’ve been doing something for 39 years, you get pretty good at it.”

Elliott came to terms long ago with his near Triple Crown miss astride Smarty Jones, the beloved Pennsylvania-bred who was upset by Birdstone and was second best in the Belmont Stakes.

“I’ve been asked the question so many times, and even after the race you look back and say, ‘Why didn’t he win?’ ” said Elliott. “He was the best horse, but he didn’t run the way he was supposed to run. He was rank.”

Elliott prefers to look at all of the good associated with his magical ride with Smarty Jones. “That is a great memory for me,” he said. “To get an opportunity to get a horse like that, to win the Derby, that’s every jockey’s dream, to win the Derby.”

Elliott is not sure what the next chapter of his professional life will look like. He said he has no desire to train horses or to line up mounts for another jockey as an agent. So he rides on.

“As long as I feel good riding and business is good, if I’ve got live horses to ride every day, I’ll keep going,” he said. “I guess at this stage we’ll take it year by year. Maybe two or three more, I really don’t know.”