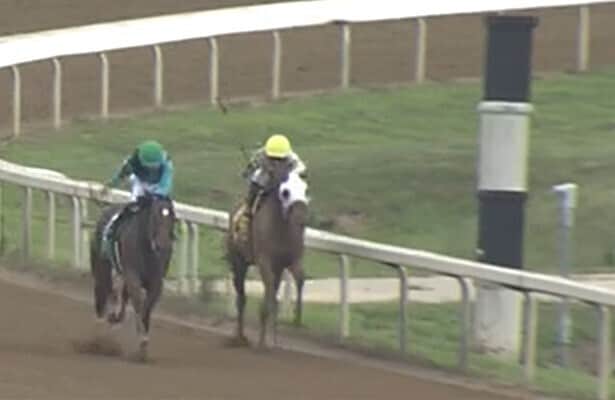 A horse was mistakenly disqualified from parimutuel wagers by stewards at Belterra Park Wednesday in an apparent misapplication of Horseracing Integrity and Safety Authority rules regarding crop use.

Daily Racing Form reported that the disqualification occurred after the fourth race at the Cincinnati-area track. Perkeo, ridden by Eder Martinez, finished second by a neck but was disqualified to last in the five-horse field.

The Equibase chart said Perkeo was disqualified because of "excessive use" of the crop in the stretch. Video shows that Martinez appears to strike Perkeo eight to 10 times in the stretch.

HISA permits six legal strikes during the entirety of a race, with limits on multiple uses of the crop without allowing two strides for a horse to respond.

Under the authority's rules, horses may be disqualified for some crop violations, but only for purse money – not for parimutuel wagers.

In a statement Thursday addressing the incident, the authority said, "As anyone might expect, there's going to be some growing pains as we begin to implement HISA. To be clear, violation of the crop rule does not affect the order of finish or parimutuel wagering; it only affects purse earnings and/or jockey suspension after the fact.

"This has been well-established in the materials and educational sessions that have been provided to stewards across the country. There was some confusion in Ohio on this rule over the last couple of days. This has now been clarified with the Ohio Board of Stewards as of this morning."

Billy Williams, a state steward at Belterra, said he could not comment on the incident and referred questions to the Ohio State Racing Commission. The commission's executive director, Chris Dragone, could not be reached for comment.