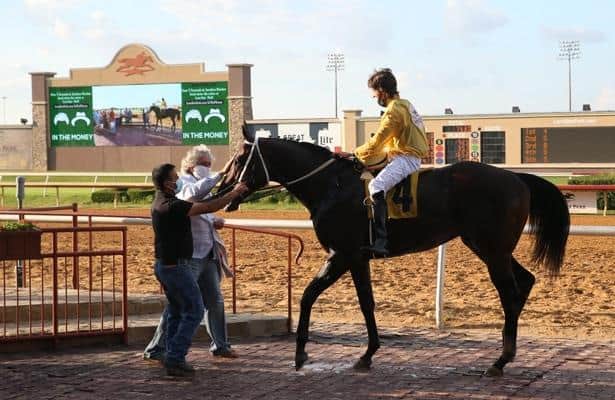 You couldn't have witnessed a prouder moment than that of Hall of Fame trainer Steve Asmussen and his wife, Julie, watching their first born son, Keith James Asmussen, ride his first winner in the nightcap at Lone Star Park.

Sunday was Stars of Texas Day at Lone Star, featuring two $75,000 stakes races celebrating Texas-bred horses, but the most exciting race of the day came when Keith Asmussen won by a head at the wire aboard Inis Gluaire. The entire place erupted in screams and cheers, more than witnessed at the track in recent memory.
Keith rode his first race at Lone Star on June 15 and had ridden a total of 16 races, finishing second four times and third twice. It wasn't until race No. 17 that he finally caught that elusive victory.
When asked how he felt, a beaming Keith Asmussen was almost speechless, but he managed to get out an excited, "It's a dream come true." He then added, "You know Lone Star has been open for 24 years and I'm 22. My earliest memories are of coming here, so to get a win here is just surreal."
Inis Gluaire, a 3-year-old son of Bernardini, is trained by his father, who said, "You know the amazing horses we've had and how blessed we've been, this is the greatest win we've ever had."

After the celebrations finally wrapped up in the winner's circle, fellow jockeys scooped up Keith Asmussen in their arms and marched him to the paddock for a dip in the fountain, a tradition at Lone Star for a rider's first win.