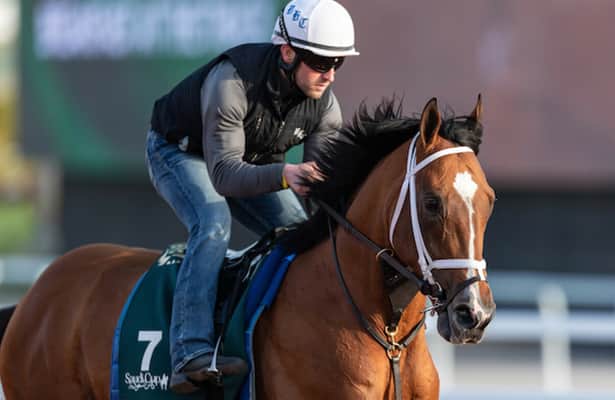 Juddmonte’s Mandaloun, the 2021 Kentucky Derby winner, worked at 5:30 a.m. (all times Eastern) for trainer Brad Cox. The 4-year-old son of Into Mischief breezed solo, which has been different than his previous works when he was in company with stablemate Fulsome.

“We thought about running in the Salvador Mile (at Monmouth Park) but it didn’t make sense to ship him across the country with the hot weather when we can run out of our own stall at Churchill,” Cox said. “Once we got him back to the barn after the Saudi Cup, he’s really been doing well at Churchill and we’ve been very pleased with his progress from that race to run him in a race like the Stephen Foster.”

“It was maybe a better race than it looks on paper,” Pletcher said. “He was pretty wide on both turns – figure wise, it came back solid. I think he took all the worst of it there off the layoff and when his schedule was adjusted late (when the Commentator at Belmont Park did not fill). He should be ready to move forward.”

Entries for the Stephen Foster will close Wednesday.