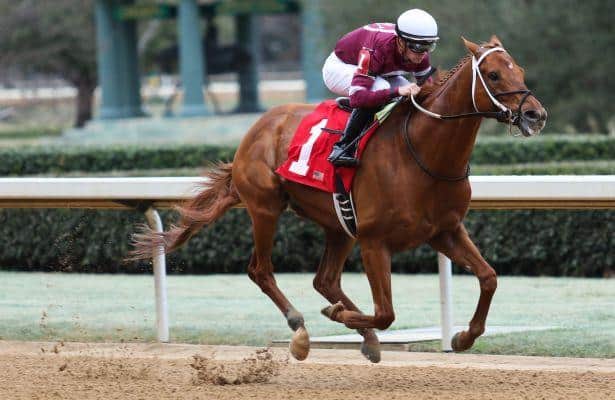 The 2017 Stephen Foster Handicap will highlight tomorrow’s Downs After Dark card at Churchill Downs. Gun Runner will be making his first start since finishing second to Arrogate in the Dubai World Cup, and the Candy Ride colt is the heavy 4-5 favorite for the Grade 1, Breeders' Cup 'Win & You're In' event, run at one and one-eighth miles on the dirt.

For race picks, see Stephen Foster Handicap 2017: Odds and Analysis from Zipse at the Track. Morning line odds are below, as seen on the HRN Stakes Tracker. 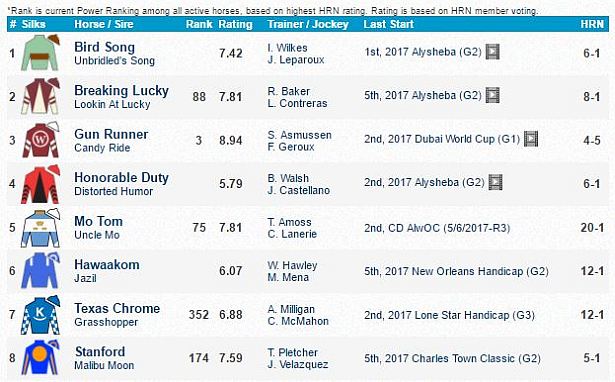 Now in his four-year-old year, Gun Runner notched his first Grade 1 in November when he took the Clark Handicap over older horses, also at Churchill Downs. He is three-for-four over the track, including the 2016 Grade 3 Matt Winn Stakes. Prior to his strong effort in Dubai, Gun Runner opened up the season by winning the Grade 3 Razorback Handicap. In the three wins mentioned, Gun Runner has sat comfortably on the lead, and should be close to the front in the Stephen Foster breaking from post three.

Stanford is another contender that does his best running on the lead. In 2016, the son of Malibu Moon took the Grade 2 Charles Town Classic gate to wire, and later won the Grade 3 Harlan’s Holiday in the same fashion. The five-year-old son of Malibu Moon also led all the way in the Challenger Stakes earlier this year. He’ll have to overcome the far outside post in the field of eight to be the pace setter tomorrow night, though.

Like the two aforementioned horses, Bird Song has also performed his best on the front end. A four-year-old colt by Unbridled’s Song, he picked up his first stakes win this year when he wired the Grade 3 Fred W. Hooper. He then improved his record with another front running win in the Grade 2 Alysheba Stakes at his Churchill Downs base. Breaking from the rail, Bird Song will be in the position he prefers, but will also be receiving pressure on the lead.

The horse with the biggest chance to upset the field could be Honorable Duty, who ran second in the Alysheba last out. Prior to that race, the five-year-old Distorted Humor gelding was on a three-race win streak at Fair Grounds, taking the Tenacious Stakes, the Grade 3 Mineshaft Handicap, and the Grade 2 New Orleans Handicap. If the front runners tire each other out, Honorable Duty could be right behind them to pick up the pieces. Ellis Starr even details on America’s Best Racing how Honorable Duty May Have Slight Edge in Loaded Stephen Foster Field.