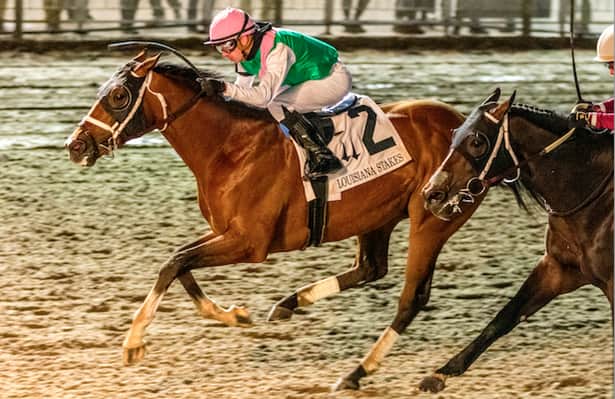 A berth in the Breeders' Cup Classic hangs in the balance Saturday at Churchill Downs.

Seven horses have entered the Grade 2, $750,000 Stephen Foster Stakes, which will cover 1 1/8 miles over the dirt. Post time has been scheduled for 5:47 p.m. EDT. Mandaloun (2-1), returning to Churchill for the first time since the 2021 Kentucky Derby, has been named the morning line favorite. Florent Géroux, who has ridden Mandaloun for each of his ten previous starts, will ride the Brad Cox trainee again.

Mandaloun has not raced since finishing ninth in the Saudi Cup (G1) on Feb. 22 at King Abdulaziz Racecourse. However, his previous start in the Louisiana (G3) on January 22 was a smart half-length win over Midnight Bourbon. Both of Mandaloun's races at Churchill Downs have been strong. He cleared his first-level allowance condition there in Nov. 2020 and also crossed the wire second behind Medina Spirit in the 2021 Kentucky Derby, though was later placed first.

In addition to Mandaloun, Brad Cox will also be represented by Caddo River (10-1), the second-longest shot on the morning line. Though he has not won in stakes company since a 10 1/4-length victory in the 2021 Smarty Jones Stakes at Oaklawn, he has gotten some recent confidence-builders. Under jockey Ricardo Santana Jr., who returns for the Stephen Foster, Caddo River has won three straight races in allowance company.

Mandaloun's toughest competition may be Olympiad (5-2), trained by Bill Mott. Olympiad has four dominant victories in four starts this year, most recently in the Alysheba (G2) on May 6 at Churchill Downs. Though that was only a 1 1/16-mile race, he successfully covered nine furlongs in the New Orleans Classic (G2) as well. Junior Alvarado, who has ridden Olympiad to five of his six career wins, has the mount this time as well.

Grade 1 winner Americanrevolution (7-2) makes the second start of his four-year-old year. Fourth on his return in the Blame on June 4, he hopes to return to winning form in the Stephen Foster. The Todd Pletcher trainee gets Luis Saez in the saddle; Saez did not ride him in the Blame, but has been there for all five of his career wins. Though Americanrevolution is a nine-furlong stakes winner against New York-breds, his Grade 1 win came over the one-turn mile at Aqueduct in the 2021 Cigar Mile.

Proxy (9-2), most recently second in the Blame Stakes, still seeks his first stakes win. However, the Michael Stidham charge has placed in stakes company five times, including four at the graded level. He has never missed the board in four tries at a mile and an eighth, and has shown some pace versatility. Proxy gets an interesting jockey change; Joel Rosario, 22% on the current Churchill Downs meet, takes the call for the first time.

Last Samurai (8-1), the upset winner of the Oaklawn Handicap (G2) last time, makes his first start since upsetting the Oaklawn Handicap (G2) on April 23. He was recently moved from the barn of Dallas Stewart, and makes his first start for D. Wayne Lukas. Despite the barn move, his regular rider Jon Court remains in the saddle. Title Ready (15-1), trained by Dallas Stewart, was most recently third behind Olympiad in the Alysheba.

Here is a look at the field for the 2022 Stephen Foster Stakes, with trainer and jockey in parentheses, and morning-line odds:

TimeformUS' pace projection shows American Revolution making the early lead over Caddo River and Olympiad. It envisions Mandaloun and Proxy midfield, with Last Samurai and Title Ready likely to rally from the rear.

Here is a look at other graded stakes action taking place Saturday across North America.  All post times are EDT.

Life Is Good (1-2), winner of both the 2022 Pegasus World Cup (G1) and the 2021 Breeders' Cup Dirt Mile, cuts back to one turn for his first start since a fourth-place finish in the Dubai World Cup (G1) on March 22. Flavien Prat will ride the Todd Pletcher trainee for the first time. He squares off against Speaker's Corner (6-5), who won three straight races through the winter and spring. The Bill Mott trainee was most recently third in the Met Mile (G1), though two starts back he won the Carter (G1) over this seven-furlong trip.

Shotgun Hottie (5-2) makes her first start for trainer William Morey and regular rider Trevor McCarthy since a sixth-place finish in the Gazelle April 9. Her only stakes win came in the seven-furlong Ruthless, though she broke her maiden going 1 1/16 miles at Churchill Downs. Republique (4-1) tries both dirt and stakes company for the first time, but is undefeated in two starts over the Gulfstream Park Tapeta  including an allowance win at a mile and 70 yards. Midnight Stroll (9-2) racked up two open-length wins at Tampa Bay Downs earlier this year, and tries to bounce back from a troubled ninth in the Black-Eyed Susan (G2) on May 20.

Main Event (5-2), winner of the Cutler Bay Stakes on the Gulfstream turf on April 2, finished ninth in the American Turf (G2) last out but will try to bounce back with this class drop. Eric Cancel rides this George Weaver trainee for the first time since his debut at Belmont. Tommy Bee (3-1), who ships in for Brad Cox, has finished second in three stakes races, most recently the Caesars at Horseshoe Indianapolis. Speaking Scout (9-2) broke slowly in the Audubon on June 4 and hopes to improve with a better start. Wow Whata Summer (8-1), the 83-1 upset winner of the Penn Mile on June 3, will attempt to replicate that form.

Drain the Clock (6-5) makes his first start since finishing seventh behind Switzerland in the Dubai Golden Shaheen (G1) on March 26. Edwin Gonzalez rides the Saffie Joseph trainee for the first time, though Gulfstream is a familiar place: in six starts over the Hallandale Beach dirt Drain the Clock has never finished worse than second. Though Willy Boi (5-2) has yet to break through in graded company, he is two-for-two at Gulfstream this year including a 5 1/4-length win in the Big Drama Stakes on May 28. Absolute Grit (4-1) attempts graded company for the first time, but has four wins in five starts at Gulfstream this year including a seven-length handicap win last out.

Catiche (5-2), trained by Jonathan Thomas, has shined over Tapeta. Jockey Kazushi Kimura rides her for the third time; their previous two races together have resulted in a second-place finish in the Bourbonette Oaks at Turfway Park and a 6 1/4-length allowance victory at Woodbine. Mrs. Barbara (3-1), who won the Mazarine (G3) over this course and distance last year, ran a good second in the one-turn Ruling Angel last time. Pioneer's Edge (4-1) stretches out to a route for the first time, and has the pedigree to thrive over this longer trip. She is by Pioneerof the Nile, and her dam Leading Edge ran third in the 2015 Selene.

2020 Kentucky Oaks winner Shedaresthedevil (9-5) loves Churchill Downs. The only time the Brad Cox trainee has lost over the course was last time in the La Troienne (G1), when she stumbled early and was just run down late. Jockey Florent Géroux hopes to get a better start with her this time. The horse who caught Shedaresthedevil that day was Pauline's Pearl (5-2), who came up flat last out in the Shawnee over this course and distance on June 4 and hopes to rebound. She will have to face She's All Wolfe (5-1) and Ava's Grace (6-1), the top two in the Shawnee, again. Super Quick (2-1), the 14 1/4-length, wire-to-wire winner of the Allaire DuPont Distaff (G3) May 20, is the exciting new face.

Trainer Roger Attfield is one win away from 2,000 in his career and may hit that milestone with Lady Speightspeare (5-2). She is a perfect three-for-three on the Woodbine turf under jockey Emma-Jayne Wilson, who reunites with her for the Nassau. Crystal Cliffs (3-1) finished a credible second in the Gallorette (G3) May 22, and the Graham Motion trainee gets strong Woodbine turf rider Rafael Hernandez in the saddle. Plum Ali (9-2), who won two straight before faltering last-out in the Beaugay (G3), adds Lasix for the first time.

Champion female sprinter Ce Ce (4-5) won the Breeders' Cup Filly and Mare Sprint last year and tries to earn a return bid in the Princess Rooney. The Michael McCarthy trainee won the race last year under her regular jockey Victor Espinoza, and they team up again. Glass Ceiling (7-2) won both the Barbara Fritchie (G3) and the Distaff Handicap (G3) this year, and won her only start so far at Gulfstream in 2020. Both Make Mischief (6-1) and Spirit Wind (6-1) come into the Princess Rooney off of stakes wins in state-bred company: Make Mischief in New York and Spirit Wind in Florida.

Rondure (5-2) has stepped forward strongly from ages two to three, with a 10 3/4-length maiden romp at Woodbine on May 14 followed by a close second in the Queenston on June 12. Trainer Katerina Vassilieva appointed jockey Rafael Hernandez to ride him for the first time. Fuerteventura (3-1) carries a three-win streak into the Marine, with his most recent triumph coming in his stakes debut, the Jersey Derby. Duke of Love hopes to rebound from a fourth-place finish in the Queenston, though his 5 1/4-length allowance win at Woodbine May 7 showed ability over the local course.

Bound for Nowhere (5-2) makes the second start of his eight-year-old year. The Wesley Ward trainee got it off on a winning note in an allowance optional claiming race at Fair Groudns March 19, and long breaks between starts are par for the course. Pablo Morales travels in to ride. Late-blooming five-year-old Voodoo Zip (7-2) won a third-level turf sprint allowance for Christophe Clement on May 29 and now makes his stakes debut. Arzak (5-1) is already a two-time stakes winner this Woodbine meet, though both of those came on Tapeta. Tap It to Win (8-1), second to Arzak in the Jacques Cartier (G3) May 15, leads a four-deep Mark Casse brigade.