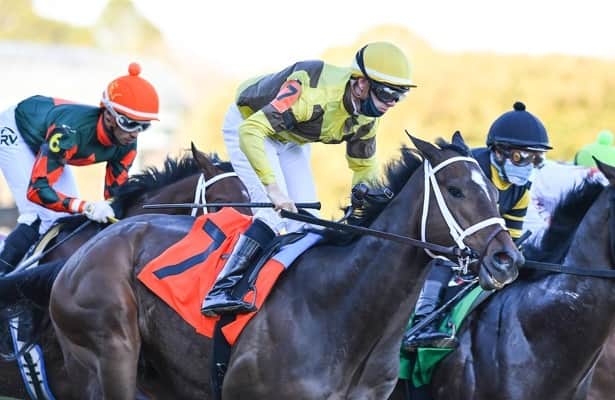 The Grade 2, $750,000 Stephen Foster, which will be run on Saturday at a mile and an eighth distance at Churchill Downs, drew a field of seven horses from the older male dirt division led by the 2021 Kentucky Derby winner Mandaloun and the streaking Olympiad.

The Stephen Foster is part of the Breeders’ Cup Challenge Series providing the winner with a spot in the Classic at Keeneland on November 5, 2022.

Mandaloun leads the field with just over $2 million in purse money earned but American Revolution, Last Samurai, and Olympiad would pass the $1 million mark for their careers if they finish in the top three in the Foster.

Here is a full-field analysis for the Foster with the morning line provided by Churchill Downs. The race is scheduled for 5:26 p.m. EDT and is carded as race 10 out of 12.

1. Caddo River (10-1 – Hard Spun – Brad Cox / Ricardo Santana, Jr. – 13: 5-4-1 - $648,900) Caddo River returns to stakes racing on the heels of a three-race winning streak in allowances at Oaklawn Park and last month at Churchill. The most recent victory came in a race with a $150,000 purse where he, for the third time, had a winning margin of more than four lengths. Last year we got to know Caddo River on the Kentucky Derby trail as the winner of the Smarty Jones and the second-place finisher in the Arkansas Derby (G1). He did not run in the Triple Crown and after a sixth in the Woody Stephens (G1) he was away from the races for six months. Trainer Brad Cox probably could have found an easier spot for this guy’s return to stakes competition although he sure is in fine form right now. He does his best when he presses the pace. Live longshot.

2. Americanrevolution (7-2 – Constitution – Todd Pletcher / Luis Saez – 8: 5-0-1 - $953,110) Americanrevolution will make his second start as a 4-year-old in the Foster after running fourth in the Blame at Churchill Downs behind Dynamic One. He ended last year with a victory in the Cigar Mile (G1) at Aqueduct after three wins in New York-bred stakes. In his eight-race career, the son of Constitution ran at seven different tracks and that includes his first start at Keeneland where he finished behind Mandaloun. This Todd Pletcher trainee stayed in Kentucky to prepare for this race. He will get a favorable pace scenario for his late running style. Win contender.

3. Olympiad (5-2 – Speightstown – Bill Mott / Junior Alvarado – 9: 6-1-1 - $952,240) In 2022, Olympiad has found the best form of his career. The 4-year-old won all four of his starts this year beginning with an allowance at Gulfstream park and then three graded stakes with a pair at the Fair Grounds and then in the Alysheba (G2) under the Twin Spires on Derby weekend where he defeated Title Ready. The running lines on all four of the races are almost identical – second in the early going, in the lead at the stretch call, and finally a clear-cut margin of victory. He won the first three times using Lasix but ran without the race-day medication at Churchill. Olympiad is currently ranked fifth in the latest NTRA Top Thoroughbred Poll. Top choice.

5. Proxy (9-2 – Tapit – Michael Stidham / Joel Rosario – 11: 3-5-1 - $438,650) Proxy is looking for his first stakes victory since he began his career with two wins in late 2020 at Fair Grounds. He ran well on the 2021 Kentucky Derby trail and then this year in three more graded stakes. He has an allowance victory to start his 2022 campaign and most recently was just a length behind Dynamic One in the Blame at Churchill to prep for the Foster. Proxy will face another formidable field in here, so it is hard to expect him to get that breakthrough win in this spot. Use underneath.

6. Mandaloun (2-1 – Into Mischief – Brad Cox / Florent Geroux – 10: 6-1-1 - $2,041,252) If you include the 2021 Haskell (G1) and Kentucky Derby (G1), which Mandaloun won by disqualification, he headed to the Saudi Cup in February (G1) on a four-race winning streak. Mandaloun travelled to the Middle East chasing the $20 million purse in the Saudi Cup and did not fire on that day when he finished ninth in a field of 14. The only other non-top three finish in his career was in the Louisiana Derby (G2) when he mysteriously came up empty in his final prep race for the Run for the Roses. On his best days Mandaloun uses a stalking style. He has been training impressively at Churchill for his return to the races after four months off. Win contender.

7. Last Samurai (8-1 – Malibu Moon – D. Wayne Lukas / Jon Court – 15: 4-3-2 - $946,744) This 4-year-old has four wins and almost $1 million in earnings of which a large portion came from his April victory in the Oaklawn Handicap (G1). Last Samurai was second in the long-distance Temperance Hill and the winner of the Poinsettia in December, both of those were also run at Oaklawn Park. His big win in the Oaklawn was a pace-pressing effort which differed from his usual late running style. During this past week, Last Samurai was moved to D. Wayne Lukas from the barn of Dallas Stewart. Use underneath.

Summary: Olympiad comes into the Stephen Foster on a 4-race winning streak that began with an allowance in Florida and now includes three graded stakes. If the Bill Mott runner stays in top form, he will be hard to beat.

Americanrevolution, Mandaloun, Last Samurai, and Caddo River have past races that make them serious contenders, but it is hard to know what to expect on Saturday.

Caddo River comes with morning line odds of 10-1. Brad Cox has helped older horses find their best as he did with Knicks Go. Is Caddo River ready to make the jump to graded stakes success? It might be worth a bet since he is likely to be third or fourth choice.