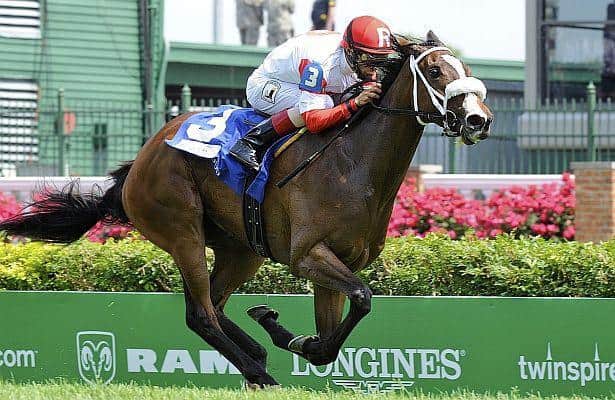 A well-matched field of 12 grass specialists including the ultra-consistent mare Stephanie’s Kitten in the Woodford Reserve Turf Classic (GI) and the 2015 debuts of Judy the Beauty and Bayern highlight a delicious Saturday appetizer leading up to the 141st running of the $2 million Kentucky Derby Presented by Yum! Brands (GI) at Churchill Downs.

Runner-up in the Breeders’ Cup Filly & Mare Turf (GI) to close out 2014, Stephanie’s Kitten started 2015 with a victory in the Hillsborough (GIII) at Tampa Bay Downs in March. At Churchill Downs, Stephanie’s Kitten has won all three of her starts: the Breeders’ Cup Juvenile Fillies Turf (GII) in 2011, the Edgewood in 2012 and last year’s Churchill Distaff Turf Mile Presented by Longines (GII).

Stephanie’s Kitten will be ridden by John Velazquez and break from post position eight.

Victor Espinoza, who will ride probable morning-line favorite American Pharoah in the Kentucky Derby, has the mount and will break from post position five.

Returning for a second run in the race is Juddmonte Farms’ Seek Again. Trained by Bill Mott and to be ridden by Joel Rosario, Seek Again came within a head of upsetting reigning two-time Horse of the Year Wise Dan in last year’s race.

Jack Milton is owned by Gary Barber and trained by Todd Pletcher. In his most recent start, he won the Maker’s 46 Mile (GI) at Keeneland. Javier Castellano returns to ride and will break from post position seven.