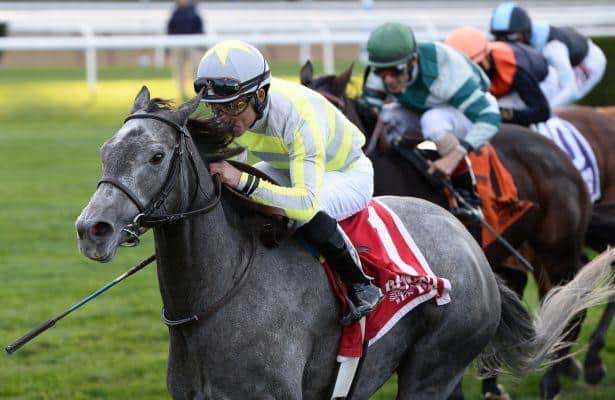 Trevor Stewart's Stellar Path made the grade in her fourth North American start, holding on to a half-length advantage at the wire to win the 38th running of the Grade 3, $200,000 Athenia for fillies and mares on the inner turf Saturday at Belmont Park.

Breaking from the inside post with Joel Rosario aboard for the first time, Stellar Path contently tracked the early pace established by Keri Belle, who guided the field of 13 through an opening quarter-mile in 26.44 seconds and the half in 50.93. Stellar Path moved from her mid-pack position in the far turn as the leader cleared six furlongs in 1:14.72, edging into contention. The French-bred filly found running room as the field turned for home, angling just off the hedge to power by a fading Keri Belle and keep the rest of the field at bay for the victory.

"I had a perfect trip," said Rosario. "At the five-sixteenths pole I wasn't sure if I was going to come out or stay inside. The [No.] 2 horse went out a little bit, so I took a chance and went through on the inside because I had a lot of horse at that point. Everything worked out well today. I had a chance to work her in the morning and I like her. She's a nice filly and does everything well."

Beginning her career in Europe, Stellar Path, by Astronomer Royal, compiled a record of 5-3-1 from 13 starts before joining Christophe Clement's barn for her 2015 season. The 4-year-old took her North American debut by a half-length in the Plenty of Grace in April at Aqueduct before taking on graded company, coming in fourth as the post-time favorite in the Grade 2 Nassau in May and third in the Grade 3 Eatontown the following month.

Stellar Path finished a close third in her most recent attempt as the even-money choice in the Avowal on September 7 at Woodbine.

"This filly has been a bit unlucky all year long; she's a touch difficult to ride," said Clement. "Joel came, he worked her last Sunday, and she actually worked in company with Hard Not to Like. He got to know her and everything worked out. She was just wide behind the leaders, perfect ride. They all opened up and she won the race."