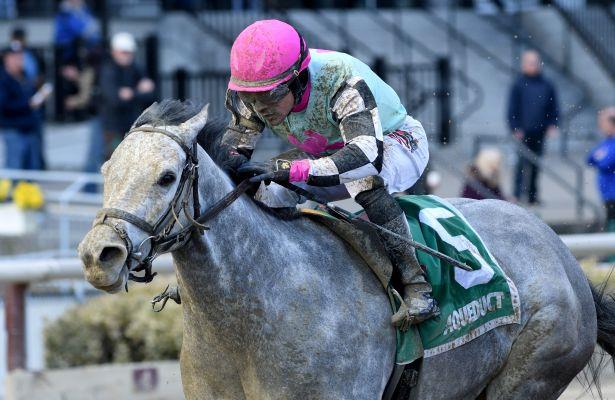 New York-bred Startwithsilver patiently waited for her opportunity and capitalized with a stretch-drive surge from the outside, overtaking four competitors in the final furlong and holding off Yorkiepoo Princess by a neck to win the 79th running of the $100,000 Correction Stakes for older fillies and mares on Saturday at Aqueduct Racetrack.

Seeking her first stakes win in more than a year, Startwithsilver was second-last in the six-horse field as 45-1 longshot Filibustin led through an opening quarter-mile in 22.64 seconds and the half in 46.28 on the fast main track.

Jockey Junior Alvarado, who rode Startwithsilver to a third-place finish in last year's Correction, ensured his charge would earn a trip to the winner's circle in the return engagement, urging her out of the turn.

The 6-year-old Jump Start mare, one of four entries for trainer Linda Rice, made a strong move from the middle of the track, taking command with four challengers to her inside in Yorkiepoo Princess, stablemates Sounds Delicious and 9-5 favorite Sower, as well as Filibustin. Startwithsilver hit the wire in a final time of 1:11.19 for the six-furlong sprint.

"I had to play it by ear. I didn't want to leave her with too much to do," Alvarado said. "At the same time, she's one of the only horses in the field that likes to run from behind, so I kind of had to sit early and hope for a fast pace.

"They were moving, but they weren't really going that fast up front, so that's why she wasn't too far back," he added. "I tried to save some ground and when I put her in the clear she started picking it up and giving me a nice run. She likes to run on the outside and I always have to time it with her, because sometimes when she gets to the lead, she gets a little lost. She did everything right today and we got there in time."

Owned by Iris Smith Stable and Lady Sheila Stable, Startwithsilver went off at 5-2, returning $7.70 on a $2 win wager. She won her first stakes since the Broadway in February 2018, increasing her career bankroll to $412,059.

After running fifth in the 2019 edition of the Broadway on Feb. 16 at the Correction distance, Startwithsilver rebounded with her second win of the year while improving to 5-0-1 in seven career starts at Aqueduct.

"The last race she [Startwithsilver] ran, I had her at around 80 percent ready. She ran decent, but I knew she was ready today," Rice said. "I thought we might have a wet track, which she loves running on. We didn't get it, but I was really impressed with the way she ran on a dry track the way she did.

"Those were some really nice fillies," she continued. "I thought she was close enough to get there. I had two speed [Sower, Sounds Delicious] and two closers [Honor Way, Startwithsilver] in the race. I was nervous about the two speeds, but I thought Sounds Delicious [third-place finisher] ran super. I think Sower might be a little better going longer."

Danny Chen's Yorkiepoo Princess, a Gold member of the New York Racing Association Starter Loyalty Program, dueled Startwithsilver to the wire and was the runner-up, 1 ¼-lengths clear of Silver member Sounds Delicious. It was the fourth time in the last five starts the Edward Barker trainee finished first or second.

"She is a very game filly," said Yorkiepoo Princess jockey Dylan Davis. "Today, I just let her break comfortably. I knew there was some speed that could show up and it did, so I just let her be where she wanted to be. She was sitting in a nice spot tracking, and I saved as much ground as could. When the running started, I angled her out and she kicked on nicely. It's just that the other filly on the outside [Startwithsilver] had a little more momentum than we did."

Sower, the Rice-trained Honor Way and Filibustin completed the order of finish.