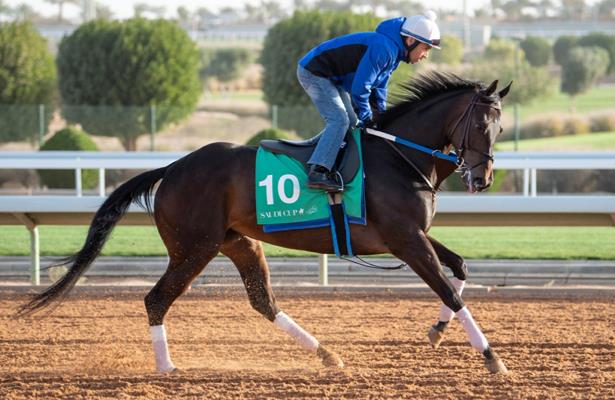 To a man, those closest to Midnight Bisou all kept coming back to the same descriptor over and over again.

She was the dream come true, they said, the manifestation of all the reasons people sink their time, money and hearts into the sport of Thoroughbred racing. Since her career debut at Santa Anita Park in October of 2017, the dark bay mare had become the proverbial horse of a lifetime for her ebullient owners and even had her Hall of Fame trainer gushing as she complied a resume full of some of racing’s top prizes.

Every accolade she earned was the type that most spend decades in the industry trying to sniff. And after seven straight races of not putting a foot wrong last year, she was showing the same level of enthusiasm in her training that had become her #EarsUp trademark.

So on the eve of what was supposed to be her final career run for his team, co-owner Jeff Bloom decided to heed what he and his crew had been saying all along and embrace the obvious. Instead of selling Midnight Bisou as originally planned at the 2019 Fasig-Tipton November Sale days after her start in the Longines Breeders’ Cup Distaff, Bloom and his partners decided they would be foolish not to hold onto their living, breathing fantasy for a while longer.

“It was the realization of, what are we doing? The reason we got in this game was to have opportunities and experiences like she’s provided to us and you know, she was a young filly still with plenty of time and opportunity for her to be a broodmare,” Bloom said of the decision to pull Midnight Bisou from the Fasig-Tipton sale and keep her in training for her 5-year-old season. “We just figured this is crazy. All the while leading up to her being sold, it was just like trying to put that out of your mind and, the night before the Breeders’ Cup, we just kind of sat down and said ‘None of us really want to do this; let’s just race her another year.’

“And once we decided … it was such a relief. It was this huge weight that had been lifted off our shoulders.”

With the ride of a lifetime for Bloom and Co. still in progress, Midnight Bisou will start her 2020 campaign off by aiming to take her connections into an even higher stratosphere. The reigning champion older dirt female is set to face the opposite sex for the first time in her career when she makes her expected start in the inaugural running of the $20 million Saudi Cup on Saturday at King Abdulaziz Racetrack.

Racing fans often decry the retirement of equine standouts when they are seemingly still at their peak. Hence, the announcement that Midnight Bisou would race on regardless of her Breeders’ Cup outcome was roundly hailed as a victory for the sporting side of the argument, especially after she finished second to the Argentine-bred Blue Prize in the Distaff, her lone loss from eight starts in 2019.

While that one defeat didn’t prevent Midnight Bisou from earning divisional honors at the 49th annual Eclipse Awards, it did provide a bit extra validation for her camp that they had made the right call. When the finalists for 2019 Horse of the Year were announced, Midnight Bisou’s name was not among the trio - a bit of a blow considering much of the pre-Breeders’ Cup chatter had her squarely in the mix for racing’s top North American prize.

“I felt just as an objective racing fan/observer, she had put forth a campaign that was worthy of Horse of the Year honors or certainly in the discussion of it,” said Bloom, whose Bloom Racing owns Midnight Bisou in partnership with Madaket Stables and Allen Racing. “But at the end of the day, you go out there and you do your work and you hope the results are good. She is an Eclipse champion, which is incredibly gratifying and really a dream come true. It would have been nice to have been included (for Horse of the Year) … but we’ve got another shot at it this year.”

If she sticks to her own career script, there is another level of upside to be unleashed from the daughter of Midnight Lute with the demeanor as sweet as her turn of foot is dangerous.

At age 3, Midnight Bisou was one of the elite members of her class with Grade 1 wins in the Santa Anita Oaks under the care of original trainer Bill Spawr and in the Cotillion Stakes via disqualification after joining Steve Asmussen’s Hall of Fame shedrow that summer. When the calendar turned to her 4-year-old season, however, the expected steps forward in her progression proved to be massive strides.

Her season-opening victory in the Grade 3 Houston Ladies Classic last January would be the first of seven consecutive graded triumphs for Midnight Bisou on the year, including three top-level victories. In the Grade 1 Odgen Phipps Stakes last June, she was a study in the sublime as she cruised to a 3 ½-length triumph. When one of the few arguments against her superiority were supposed limits on her stamina, she shut the door on that critique by out-fighting rival Elate in a brilliant stretch battle to take the Grade 1 Personal Ensign Stakes by a nose over the same nine-furlong distance she will travel around one turn in the Saudi Cup.

“As good as she was last year, this year even though she has yet to run a race, she’s even more impressive in terms of her physical presence and overall attitude,” Bloom said. “Steve has been very bullish and excited about how much she continues to develop. Each of her successive workouts leading up to shipping over to Saudi Arabia has been that much more impressive.

Should all go well in this weekend’s Saudi Cup, Midnight Bisou’s ability to thrive on her work and recover in swift fashion could be put to another stern test with a possible start in the $12 million Dubai World Cup at Meydan Racecourse on March 28. No female runner has ever prevailed in Dubai’s signature test and its 2,000 meters distance (about 10 furlongs) would mark the farthest she has run.

As Bloom has been reminded over and over, fate only puts horses of Midnight Bisou’s caliber in the path of a precious few. To not give her the chance to see how high she can lift herself and those around her is something her connections ultimately decided would be a disservice.

“There hasn’t been a point in time when we’ve looked back and thought it wasn’t the right decision” to keep her in training, Bloom said. “In talking to (assistant trainer) Scott (Blasi), who is over there with her, his comment to me was it’s as if she’s never gotten on an airplane. And she’s always been that way in terms of adapting to her environment and settling in so well and being so comfortable in any situation you throw at her.”