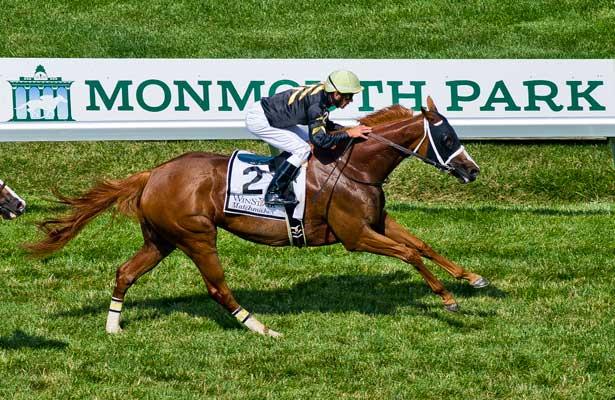 Monmouth’s feature race on Saturday is the Grade 3 Violet Stakes for fillies and mares, and trainer Larry Jones will send his charge Starstruck in search of the winner’s share of the $100,000 purse.

A 5-year-old mare by Flatter out of Cobra’s Love, Starstruck has raced twice at Monmouth Park, in both the 2013 and 2014 renewals of the Matchmaker Stakes (G3). In 2013 Starstruck bested the field by a length and a quarter after traveling a mile and one eighth along the turf, and came back this year on July 27 to repeat in the Matchmaker with an identical margin of victory. She will again travel a mile and one eighth along the grass in Saturday’s Violet.

“She’s run really good at Monmouth every time,” said Jones. “She does like that course and she likes a firm course, so if you can make sure no rain falls between now and tomorrow I’d appreciate it. But when she gets the surface that she likes she’s a very nice filly. She sure doesn’t like a soggy or yielding one so hopefully tomorrow will be nice and firm.”

Since the Matchmaker, Starstruck has posted two works at her home track of Delaware Park, breezing five furlongs along the dirt in 1:04 4/5 on Aug. 9, and going the same distance along the main track in 1:02 4/5 on Aug. 18.

“For her having to train on dirt she’s been doing very well,” said Jones. “Her works are very typical of her here because she’s just not a dirt horse, but she’s one of the few that I gallop every day. She’s really doing well and she should put in a good performance tomorrow. If we get a good trip we’ll be ok.”

Bred in Ireland by Mrs. C. L. Weld, Starstruck, the 4-1 morning line favorite, will face an overflowing field of 15 in the Violet. Her toughest competition will likely come from multiple graded stakes winner Overheard, second choice on the line at 5-1. Nellie Cashman and the Kevin Attard trained Why Katherine are next on the line, both at 6-1.

“With that many horses we sure don’t want to be in the back of the pack,” Jones said, “especially if the turf is nice and firm speed does pretty well there. Hopefully we can be able to drop in and stay relatively close. She’s packing seven pounds more than the majority of the horses so you don’t want to do anything real adverse or real quick. You hope you have a nice steady pace and a nice steady trip and hopefully it’ll all come together for her.”

Jockey Kerwin Clark will return aboard Starstruck in the Violet, which will go as race 11 on Saturday’s 12-race card.

MICHAEL WITH US TRIES FOR BIG UPSET AT HOME TRACK

This Sunday local trainer Steve DiMauro will send Michael With Us into the Grade 3 Cliff Hanger Stakes set for a mile and one eighth along the turf course. A field of seven will face off in search of the race’s $100,000 purse.

A 4-year-old colt by Bluegrass Cat out of the Unbridled’s Song mare Unbridled Melody, Michael With Us finished a close fourth by 2 ½ lengths in his last race, the Grade 3 Oceanport Stakes at Monmouth Park on July 27, Haskell Day. Since that race he has posted one work, a bullet effort at his home track in Oceanport, breezing five furlongs along the dirt in 1:01 flat on Aug. 11.

A Kenwood Racing LLC color-bearer, Michael With Us will stretch out a bit at a mile and one eighth after running a mile and one sixteenth in his last two outings. DiMauro believes that this could give his horse a slight advantage against a tough field.

“I think the extra distance will help him,” DiMauro said. “I think he’s better going farther. Last year he ran a couple good races going a mile and an eighth. I’m hoping that’ll give me an advantage over a couple others that might not want to do it.”

In order to claim victory in the Cliff Hanger, Michael With Us will have to upset the heavy favorite and multiple Grade 1 winning Big Blue Kitten who is 3-2 on the morning line. Next closest on the line is the Todd Pletcher trained graded stakes winner Winning Cause at 3-1, with Michael With Us at 8-1.

As for strategy DiMauro said, “There’s only one horse that has speed on form, but I’d have to say that it won’t be a lively pace. If it isn’t he’ll probably be a bit closer than he was the last time. He kind of settles into one speed and once he’s comfortable he’s alright. It’s preferable to just let him settle and make the one run.”

Jockey Gabriel Saez will be aboard Michael With Us in the Cliff Hanger, which will go as race 11 on Sunday’s 12-race card.

This Saturday Monmouth Park will host a $400 NHC Super Qualifier handicapping contest, the largest one day NHC-qualifying handicapping contest in the country. The top 10 finishers each earn an all-expense paid round-trip to Las Vegas and a berth in the 2015 DRF/NTRA National Handicapping Championship.

Of the $400 required to participate, $250 constitutes the entry fee with the remaining $150 left for wagering. Bettors can make win, place, and show wagers on Monmouth and Saratoga only and must bet a minimum of 10 races, five at each track, at a minimum of $15 per race, with no maximum bet.

Sign ups for the contest begin at 11 a.m. inside both the Clubhouse and Grandstand entrances. Feel free to email bskirka@monmouthpark.com with any questions pertaining to the event.