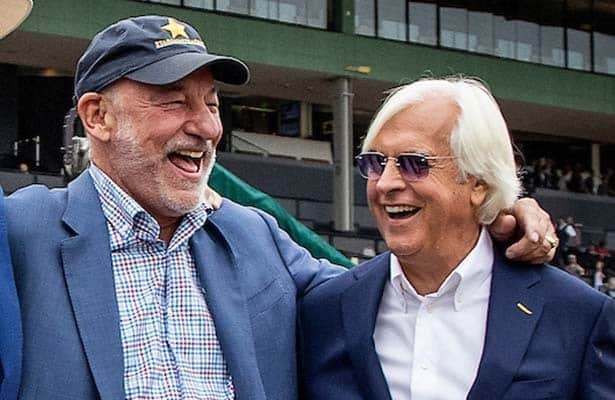 Jack Wolf of Starlight Racing has been sending young prospects to trainer Bob Baffert for years in hopes they could be developed into top Kentucky Derby prospects.

Despite Baffert’s current two-year ban from the Kentucky Derby, and his horse’s being ineligible to accrue qualifying points, that strategy will not be changing any time soon. Wolf said this week on the Ron Flatter Racing Pod he is sticking with the embattled trainer.

“We plan on using Bob,” Wolf said. “He’s done a great job for us and he’ll have his say. We just bought 32 yearlings and he’ll get the pick of the litter with those.”

Wolf is a co-owner of Rockefeller, one of three horses entered by Baffert in Friday's American Pharoah (G1), which offers an automatic berth to the Breeders’ Cup Juvenile for the winner and 17 Derby points to the top-four finishers.

Wolf indicated it was not a concern being ineligible for points given it is still so early on the road to the 2022 Kentucky Derby.

Baffert’s Kentucky Derby suspension, which was leveled after Medina Spirit won this year’s edition and subsequently failed the post-race drug test, is only part of the issues facing the Hall of Fame trainer. The Breeders’ Cup also announced it is undergoing a review of its own to determine if Baffert will be allowed to compete at this year's event.

Wolf acknowledged he’d have to call an audible if Baffert is barred from the Breeders' Cup, but does not believe things will get to that point.

“Well, if the horses are not allowed in, we’re going to have to find another trainer,” Wolf said. “My best guess is that he will be allowed to race in the Breeders’ Cup. Let’s hope he does. Knock on wood. Fingers crossed.”

You can hear the full interview with Wolf, which also includes his observations of both Corniche and Rockefeller heading into the American Pharoah, and much more on the Ron Flatter Racing Pod here.