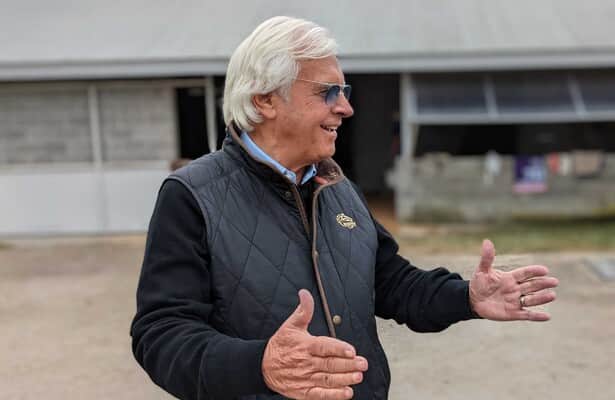 The 1 1/16 mile Grade 1, $300,000 Starlet Stakes will be contested at Los Alamitos on Saturday. The race attracted a field of seven 2-year-old fillies with three from the barn of Bob Baffert. He has won this race eight times, including each of the past five years.

The Starlet is a qualifier for the 2023 Kentucky Oaks offering 10-4-3-2-1 points to the top five finishers. The Baffert horses are not eligible to earn points because of his suspension by Churchill Downs.

Here is a full-field analysis for the Starlet Stakes with the morning line odds provided by the Horse Racing Nation staff. It is scheduled as race 9 out of nine with post time set for 7:30 p.m. EST.

1. Doinitthehardway (8-1 – Street Sense – Bob Baffert / Ramon Vasquez – 3: M-2-1 - $39,600) This daughter of Street Sense is the first of the three Baffert runners. She is still a maiden after three tries. Doinitthehardway has a pair of second-place finishes in her first start sprinting and then going a mile two weeks ago. She was well-bet in all three races and showed improving speed figures. Toss.

2. Classymademoiselle (20-1 – Malibu Moon – Jorge Periban / Tiago Pereira – 6: 1-0-1 - $61,440) Classymademoiselle was credited with a victory in her fifth start by disqualification after having the lead in the stretch and losing by a nose while going a mile. Last month she was seventh in her first try on the turf in an allowance at Del Mar. Toss.

4. Fast and Shiny (8-1 – Bernardini – Bob Baffert / Abel Cedillo – 4: 1-0-0 - $66,500) Fast and Shiny is the third Baffert runner in this field. She won her debut in August at Del Mar with relatively high odds for a Baffert first-time starter at 6-1. She was then a distant fifth in the Del Mar Debutante (G1) which prompted Baffert to try the turf. Fast and Shiny was then fourth in the Surfer Girl (G3) and sixth in a recent allowance. Toss.

5. Uncontrollable (4-1 – Upstart – Michael McCarthy / Mike Smith – 3: 1-2-0 - $111,180) Uncontrollable is a rare Repole Stable runner that is based on the west coast. Of course, trainer Michael McCarthy was an assistant for Todd Pletcher who handles most of the Repole horses in New York. She won her debut at Del Mar in July against California-breds and then was second in a state-bred stakes race. In October, Uncontrollable stretched out to two turns and finished second in the Chandelier (G2) at Santa Anita. Her speed figures made significant improvement from race to race. Top choice.

6. Pride of the Nile (5-1 – Pioneerof the Nile – Leandro Mora / Juan Hernandez – 3: 2-0-0 - $85,800) Pride of the Nile will move from turf to dirt for the first time after winning her last two starts in a maiden at Santa Anita and then an allowance at Del Mar and both races were at a mile. Long time assistant trainer Leandro Mora is filling in for Doug O’Neill who is serving a suspension. Her recent dirt workouts show plenty of speed. Use underneath.

7. Blessed Touch (3-1 – Girvin – Tim Yakteen / Drayden Van Dyke – 3: 1-1-0 - $58,200) Blessed Touch broke her maiden in her second start with a nearly 10-length front-end victory going six furlongs at Santa Anita in what turned out to be a fast race. She then went a furlong farther last month and finished second while racing from a stalking position in the Desi Arnaz at the Del Mar fall meeting. Use underneath.

Summary: Bob Baffert won the last five runnings of the Starlet, so it seems like a forgone conclusion that one of his three fillies will extend that streak and get him a record ninth victory in this Grade 1.

With a win in her first and only start, Faiza is Baffert’s best horse. The daughter of Girvin must have been quite a good-looking filly to sell for $725,000 in May. Her maiden victory was expected but not a fast kind performance.

Uncontrollable has the look of a horse that is improving based on her second in the Chandelier. Recent workouts are fast for talented trainer Michael McCarthy. Looking for better odds, Uncontrollable will be the top choice.