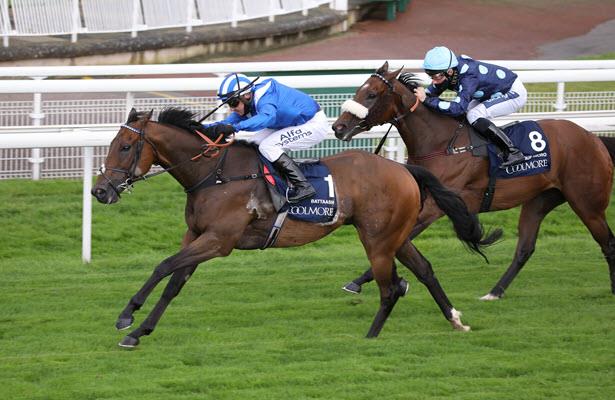 The Breeders’ Cup Challenge is a series of stakes races whose winners receive automatic starting positions and fees paid into a corresponding race of the Breeders’ Cup World Championships, which is scheduled to be held at Keeneland Race Course in Lexington, Kentucky, on Nov. 6-7.

Battaash becomes the third horse to gain a “Win and You’re In” berth into the Turf Sprint this year, joining Hello Youmzain (FR), the Diamond Jubilee Stakes (G1) winner at Royal Ascot on June 20; and Oleksandra, winner of the Jaipur Stakes (G1) at Belmont Park that same day.

On an afternoon during which wind speeds reached over 30 mph, Battaash raced prominently throughout the 5-furlong contest and eventually mastered long-time leader Que Amoro (IRE) to record a 1-length success.

Battaash, a bay son of Dark Angel (IRE) out of Anna Law (IRE) by Lawman (FR), completed the 5 furlongs in 57.38 on a course listed as good, which was just under a second and a half slower than the track record Battaash set in last year’s race.

Que Amoro, a 22-1 outsider, briefly threatened to cause an upset, with jockey Jim Crowley having to get urgent on 1-2 favorite Battaash inside the final quarter-mile. Moss Gill (IRE) ran on late to finish third.

ICYMI: Battaash captured another victory in the @coolmorestud Nunthorpe Stakes under Jim Crowley last night at @yorkracecourse for @cbhills pic.twitter.com/rZzSeaau1W

Crowley, riding his fourth consecutive winner of the day, was quick to praise the 6-year-old Battaash for overcoming conditions. Crowley said: “He’s an amazing horse. There’s a strong headwind towards the stands’ rail today, but he’s got the job done.”

Winning trainer Charlie Hills was equally relieved after seeing his stable star record career win number 13. He said: ”It's not easy out there and the ground is loose and not ideal for him. He had to knuckle down and get the job done. He’s the horse of a lifetime, to keep doing what he is doing and showing the same level of enthusiasm throughout. We’re all very proud.”

The Qatar Prix de l’Abbaye (G1) at ParisLongchamp on Oct. 4 is the next likely start for Battaash. Hills said: “Paris would be Plan A, but if the ground is like it was last year, we’ll have to have another plan.”

Bookmakers Sky Bet make Battaash the 5-2 favorite for the Breeders’ Cup Turf Sprint and asked whether the gelding could make the journey over to Keeneland in November, Hills said: “That’s definitely going to be a decision from Sheikh Hamdan. Plan A is to go to France, but after that who knows.”